The deadline for 2017 corporate financial statements will expire within one month, but almost 90 percent of companies have not yet published any. To date, an astounding 65 percent of businesses have failed to insert their accounting documents in the collection of documents pertaining to 2016. Twenty-five percent of firms, i.e. more than 124,000 business entities, have not met their information duty even once in the past six years. The statistics were provided by the consulting company Bisnode, which has the most extensive Czech database of corporate financial and exchange-of-payments.

“The State has failed to effectively and systematically enforce the firms’ duty to provide their accounting documents to the collection, the omission massively abused by businesses which thus effectively dodged their information duty over many years. However, change could ensue from the government-tabled draft amendment to the corporate act. The bill has been in the pipeline for some time and this is probably why we are witness to a massive backlog of financial statements that newly appear in the collection of documents, many of them relating to a very distant past,” says Bisnode director Jiří Skopový, who adds that in the past four months the share of firms in default of their 2016 financial statements has dropped 4.4 percentage points, down from 69.15 % to 64.77 %.

“However, the situation is still quite disappointing, setting unequal conditions for enterprise and paradoxically harming the honest entrepreneur, who meets the requirements according to the law,” Bisnode’s Jiří Skopový admits.

“The Anticorruption Endowment has long and consistently kept an eye on how firms meet or fail to meet their duty to disclose information. We have submitted many suggestions to courts which subsequently helped to put things right. Since the problem also significantly concerns the companies that draw funds from the national budget, no small public funds might be siphoned off for not so translucent purposes. Therefore we deem it necessary for the firms that either dodge or pay lip service to this obligation to be excluded from the public procurement process, in order to prevent possible corrupt conduct,” notes Karel Škácha, Director of the Anticorruption Endowment (NFPK).

The amended bill newly envisages the possibility of winding up a firm without bankruptcy proceedings if it fails to insert its financial statements for two consecutive accounting periods and it is at the same time not possible to deliver a notice to such firm, urging it to meet its obligations and provide the missing financial statements to the collection of documents as above. “State hopes this will weed out sleeping firms with no demonstrable business activities from the business register. Let’s hope our expectations will be met,” adds Karel Škácha of the Anticorruption Endowment (NFPK).

According to Bisnode’s internal methodology, there are 102,400 “dormant companies” in the Czech Republic, or a fifth of the total of registered businesses. Nearly 233,000 firms have not yet published their closing financial statements for 2016 and 2015, and more than 124,000 companies did not insert their accounting documents on any occasion between 2011 and 2016. 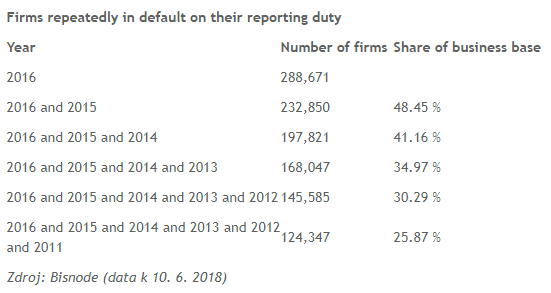