In six Central and Eastern European (CEE) markets, 1,040 acts were approved between 1 August 2016 and 1 August 2017. This is 5.3% fewer than in the same period last year. The number of approved acts dropped after 3 straight years of increasing productivity. The most regulated industry in 2016/2017 was service sector (14%) as opposed to last year when finance was the most regulated (17%). In comparison to last year, acts generated less media attention in CEE in average, the figure dropped from 48.5% to 33.1%, significant increase was recorded only in the Czech Republic, says the Grayling AcTrend Report 2017, prepared by Grayling in CEE.

After three years the number of approved acts decreased in the region
The research found a moderate, 5.3% drop in the overall number of acts passed compared to last year, adding up to 1,040 acts passed in the six CEE markets over the course of the twelve-month period. Similar to previous years’ results, the most active countries of the region were once again Romania, with 280 acts passed, Poland with 220 and Hungary with 200. The biggest drop occurred in Bulgaria where the number of adopted bills fell by 46% because of a protracted political instability following the parliamentary elections that prevented regular lawmaking. Hungary (+7,5%) and Slovakia (+33%), however, went against the trend with slight increases in legislative activity.

Service sector is the most regulated in CEE
45% of the approved acts (468 out of 1,040) had a direct impact on business, while more than a third of them affected the business sector in general (36%). As opposed to previous years when the finance sector was among the most affected, in 2016-2017 the most acts approved by parliaments affected the service sector (14%), while finance fall back to fourth position (10.4%). The least impacted sectors were ICT and energy across the region.

Three out of four acts were submitted by governments
Similarly to last year, the most productive MPs are from Romania (36%) and Bulgaria (26%), while there was a remarkable drop in Poland (-30%) where there was a rush of legislative change last year which has been scaled back since the elections hence the big gap. The number of acts submitted by MPs in Romania increased for the third year in a row, even after the legislative elections which is a sign of improving trust between legislators and the Romanian business and trade community. The number of bills introduced by MP’s has still a long way to go in catching up with government initiatives.

In Bulgaria every act in 2016/17 was approved through a standard procedure while Slovakia where none of the acts was adopted with an extraordinary procedure in 2015/16 the use of this political tool jumped to 10% in 2016/17.

Media attention decreased compared to last year
While 48.5% of acts generated significant media attention in the region last year, this figure dropped to 33.1% this year. The biggest drops were recorded in Slovakia (42%) and Poland (28%). The only significant increase (+27%) was seen in the Czech Republic as 2017 is an election year when the media is usually more sensitive about political news.

‘It is always interesting to see how elections or EC Presidency influence the work of legislators. In the past 12 months there were elections in Bulgaria, Romania and the Czech Republic, which highly affected the number of acts and the legislative procedure in general. We are looking forward to the upcoming months when Hungarians go to the polls, presidential elections are held in the Czech Republic and Bulgaria will chair the EC’ – commented Peter Fecko, Managing Director, Grayling CEE on the study. 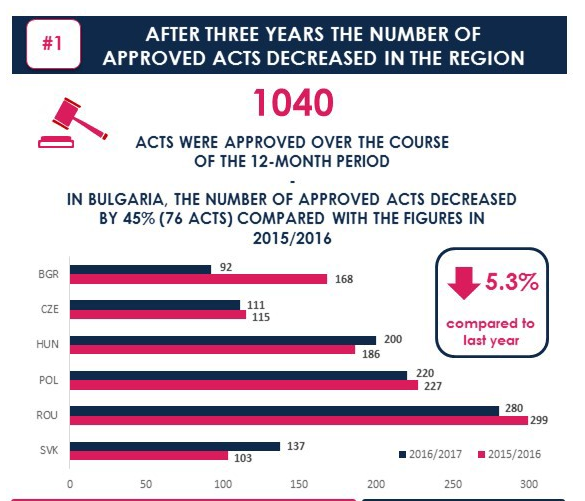 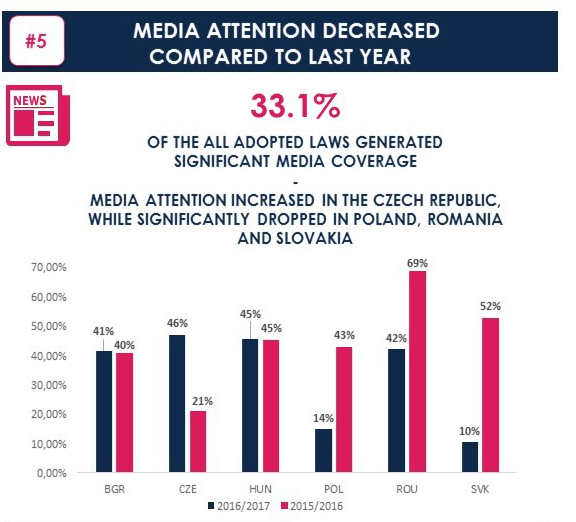 The role of international law in the Russian invasion of Ukraine

How prepared is the Czech business environment for whistleblowers? Three quarters of companies that have implemented a whistleblowing mechanism praise it, EY survey shows