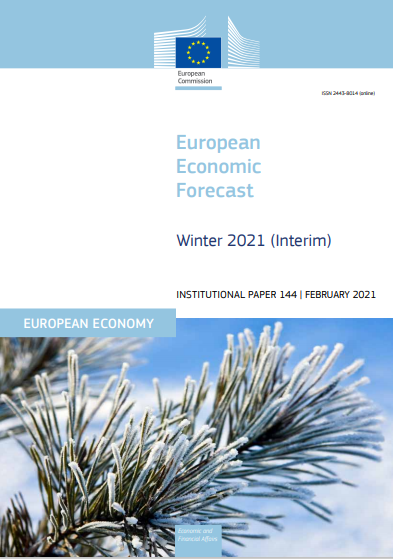 "The near-term outlook for the European economy looks weaker than expected last autumn, as the pandemic has tightened its grip on the continent. The resurgence in infections since the autumn, together with the appearance of new, more contagious variants of the coronavirus, have forced many Member States to reintroduce or tighten containment measures. The European economy is thus expected to have ended 2020 and started the new year on a weak footing. However, light has now appeared at the end of the tunnel that the European economy entered almost exactly one year ago. As vaccination campaigns gain momentum and the pressure on health systems to subside, containment measures are set to relax gradually. Activity is thus forecast to pick-up, still moderately in the second quarter, but more vigorously in the third, led by private consumption with additional support from global trade.

The breakthrough development of vaccines in the autumn and the start of mass vaccination campaigns has brightened the outlook beyond the near term. Furthermore, the agreement reached between the European Union and the United Kingdom on the terms of their future cooperation, reduced the cost of the UK’s departure from the Single Market and Customs Union; while endorsement of the Recovery and Resilience Facility is set to support Member States on their way to a sustainable recovery. Finally, the European economy showed considerable resilience in the second half of the year, rebounding vigorously in the third quarter.

Overall, GDP is now forecast to grow by 3.7% in 2021 and 3.9% in 2022 in the EU, and by 3.8% in both years in the euro area. The EU economy would reach the pre-crisis level of output earlier than anticipated back in the Autumn Forecast, largely because of the stronger momentum in the second half of 2021 and in 2022. The speed of the recovery will, however, vary significantly across the EU. Some countries have suffered more during the pandemic than others, whereas some are more dependent on sectors such as tourism, which are likely to remain weak for some time. As a result, while some Member States are expected to see economic output return to their pre-pandemic levels by the end of 2021 or early 2022, others are forecast to take longer.

Inflation in the euro area and the EU is expected to be slightly higher in 2021 compared to last autumn, but to remain subdued despite a temporary boost from base effects. In the euro area, inflation is forecast to increase from 0.3% in 2020 to 1.4% 2021 before moderating slightly to 1.3% in 2022.

These projections are subject to significant uncertainty and elevated risks, predominately linked to the evolution of the pandemic and the success of vaccination campaigns. On the positive side, the vaccination process could lead to a faster easing of containment measures and therefore an earlier and stronger recovery. Moreover, the strength of the rebound could surprise on the upside driven by a burst of post-crisis optimism that would unleash stronger pent-up demand and innovative investment projects, thanks to historically high household savings, low financing costs, and supportive policies. On the negative side, the pandemic could prove more persistent or turn out more severe in the near term, pushing back the expected recovery. There is also a risk of deeper scars in the fabric of the European economy and society inflicted by the protracted crisis, through bankruptcies, long-term unemployment, and higher inequalities. The uncertainties around the forecast are illustrated by the scenario analysis presenting alternative paths for the European economy under different sets of assumptions. Last, but not least, an ambitious and swift implementation of the NextGenerationEU programme, including its Recovery and Resilience Facility, should provide a strong boost to the EU economy."