Both for immigration and emigration, figures include people who have emigrated both on a permanent basis as well as for a period of one year or more. At a Member State level, a large majority of those emigrating were nationals, with the highest shares in Slovakia (99 %), Portugal (98 %) and Croatia (96 %). Largest shares of citizens from another EU Member State emigrating were observed in Luxembourg (67 %) and Austria (47 %), while for non-EU citizens, the highest proportions were found in Czechia (65 %) and Cyprus (60 %). 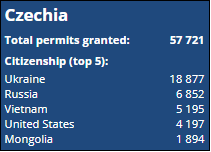