Standard & Poor’s, one of the most important international rating agencies, has in its latest rating confirmed the excellent credit rating of the Czech Republic at AA for local currency and AA- for foreign currency. These are some of the highest ratings in the EU.

The agency has looked positively at both the low level and the declining outlook for public debt, strong institutional set-up and the rapid growth of the Czech economy. According to the agency, economic growth is positively reflecting on public finances; after the general government surpluses of 0.7% of GDP in 2016 and 1.6% of GDP in 2017, Standard & Poor’s expects the surplus to continue in 2018 and 2019, which is fully in line with the current macroeconomic forecast of the Ministry of Finance.

“Credit rating agencies respond favourably to the fact that the Czech Republic’s debt between 2013 and 2017 fell from 44.9% of GDP to 34.7% of GDP, i.e. by more than 10 percentage points, and appreciate that this trend will be maintained going forward”, said the Finance Minister Alena Schillerová. 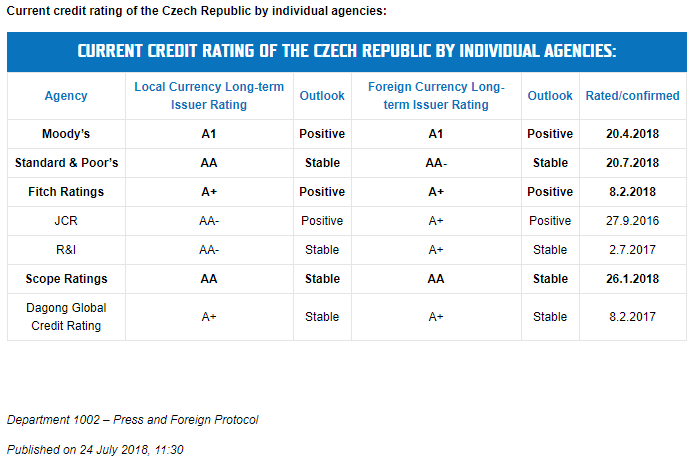 Source, author: Ministry of Finance of the Czech Republic