This weekend, Czechs cast their votes in a general election and, to the surprise of many, the country has followed the latest international trend by turning its back on the political establishment. The ANO, a political party headed by the Czechoslovak billionaire Andrej Babiš, took the country by storm and netted nearly 30% of all votes, a result last achieved by a single party ten years ago. Despite having just served a full election term as part of the government, Mr Babiš managed to convince the electorate that he represents the anti-establishment wing against the “old dinosaur”, and blamed everyone else for waging a “massive campaign of disinformation against the ANO movement".

Meanwhile, the ANO’s former coalition partner – the largest left-wing political party, the Social Democrats – suffered a devastating defeat by taking just 15 seats, compared to 50 in 2013. This election marks a clear shift towards catch-all politics and a departure from the right-left mentality dominating Czech politics over the past quarter of a century. Turnout was almost 61%, an average result compared to past years.

The SPD (Freedom and Free Democracy Party), an anti-immigrant and proreferendum party led by Tomio Okamura, a Czech national of Japanese origin, gained 10% of the vote. As a Czech journalist pertinently observed, in a country where only 12 immigrants were accepted based on EU immigration quotas, 22 seats are now held by an anti-immigrant party. 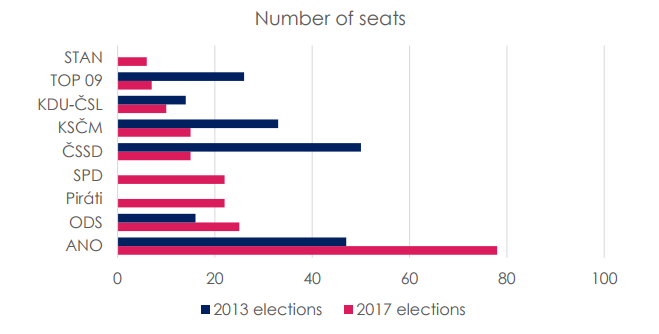