The Economist Intelligence Unit's (EIU’s) Democracy Index 2016 measures the state of democracy by rating electoral processes and pluralism, the state of civil liberties, the functioning of government, political participation and political culture in more than 160 countries worldwide. The EIU’s ranking shows the average global democracy score in 2016 fell to 5.52, down from 5.55 in 2015 (on a scale of 0 to 10).

The report finds that less than half (49%) the world’s population lives in a democracy of some sort, and only 4.5% reside in a “full democracy.” This is a steep decline from 2015, when it was just under 9%.Find out more.

The former communist bloc in Eastern Europe has experienced the most significant regression recorded since the Democracy Index was launched in 2006. There is widespread disenchantment with democracy, with 18 countries in regression on its democratic trajectory and the remaining nine stalling to various degrees.

Estonia ranks the highest, at number 29. However, the EIU points out that there is not a single country which achieves ‘full democracy’ ranking, even though 11 of the countries surveyed are EU members. The most noticeable decline was in the rating of electoral processes.

Eastern Europe does not have a single “full democracy”, as some of the region’s most politically developed nations, such as Hungary, Poland, the Czech Republic and Slovenia, have failed to establish a democratic political culture or encourage broad political participation. Even some of the formal trappings of democracy are now being called into question, the report says. 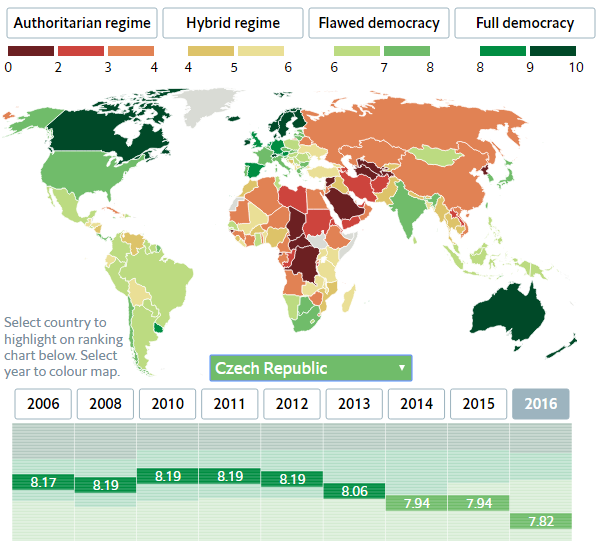