OECD Science, Technology and Industry Scoreboard 2017: Centrality of ICT services in the Czech Republic has been increasing

Quantitative skills, ICT skills, numeracy and STEM skolls as well as self-organisation and management and communication skills seem to be especially important in digital-intensive industries, OECD's Science, Technology and Industry Scoreboard 2017 says and shows, among others, digital intensity across sectors and job gains and losses in various industries. 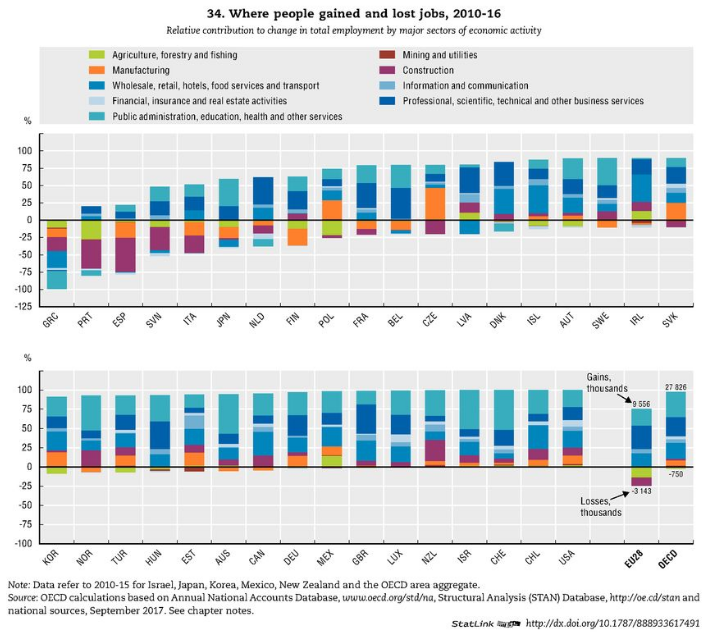 According to OECD, between 2010-16, in the Czech Republic, most jobs were added in manufacturing, public administration, education health and other services, as well as in professional, scientific, technical and other business services. Most job losses occured in the construction sector.

In the following infographic, dark blue colour shows the highest digree of digital intensity (globally among OECD countries) in the sectors of Publishing and broadcasting, Telecommunications, IT services, Finance and insurance, as well as Law and accountancy services, Scientific R&D, and Other business services, among others. 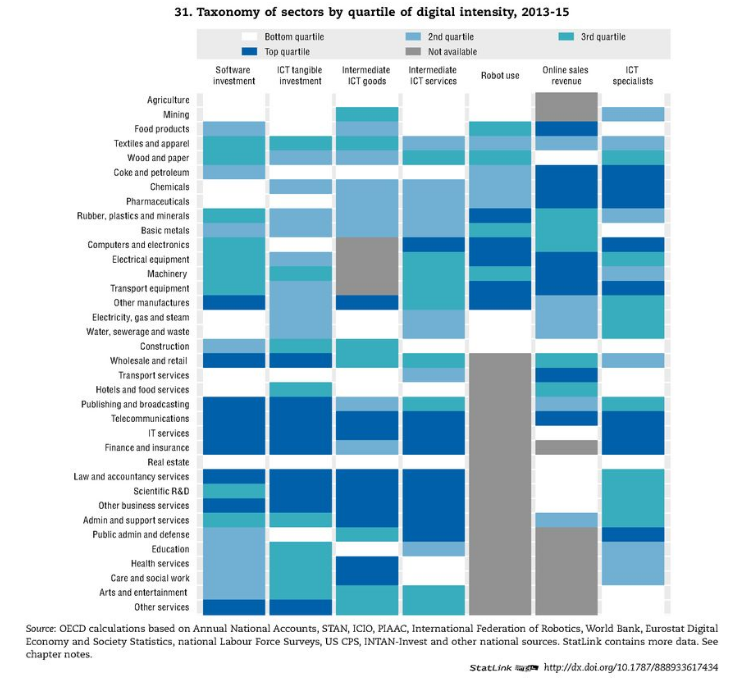 For each indicator, sectors are ranked by their value as an average across countries and years. The sectors with the highest digital intensity (top quartile) are colored dark blue, while those with the lowest intensity are coloured white. Data on robot use are not available for services other than utilities and constructions, while online sales data are not available for Agriculture, Mining, Financial services, and other sectors. Purchases of ICT intermediate goods by the machinery manufacturing sectors are not considered, to avoid mismeasurement.

According to the report, the Czech Republic, Estonia, Finland, Greece, LAtvia, the Slovak Republic, Slovenia and the United Kingdom experienced marked reductions (greater than 2%) in average productivity growth between 2009 and 2015, compared to the period 2001-07 with declines in manufacturing productivity growth particularly evident.

E15: Digitization of Czechia: Key public services should be completely online by 2030

Ekonom: Czechia has a chance for digital transformation. But it cannot be stifled by a flood of regulations