Home > Competitiveness > Education > Eurostat: Less than 9% of Czechs suffered from material and social deprivation in 2016

Eurostat: Less than 9% of Czechs suffered from material and social deprivation in 2016

Last year, 16% of the EU population (75 million people) suffered from material and social deprivation, according to Eurostat data.

This means that they could not afford at least five items out of this list:

- face unexpected expenses;
- one week annual holiday away from home;
- avoid arrears (in mortgage, rent, utility bills and/or hire purchase instalments);
- afford a meal with meat, chicken or fish or vegetarian equivalent every second day;
- keep their home adequately warm;
- a car/van for personal use;
- replace worn-out furniture;
- replace worn-out clothes with some new ones;
- have two pairs of properly fitting shoes;
- spend a small amount of money each week on him/herself (“pocket money”);
- have regular leisure activities;
- get together with friends/family for a drink/meal at least once a month;
- have an internet connection. 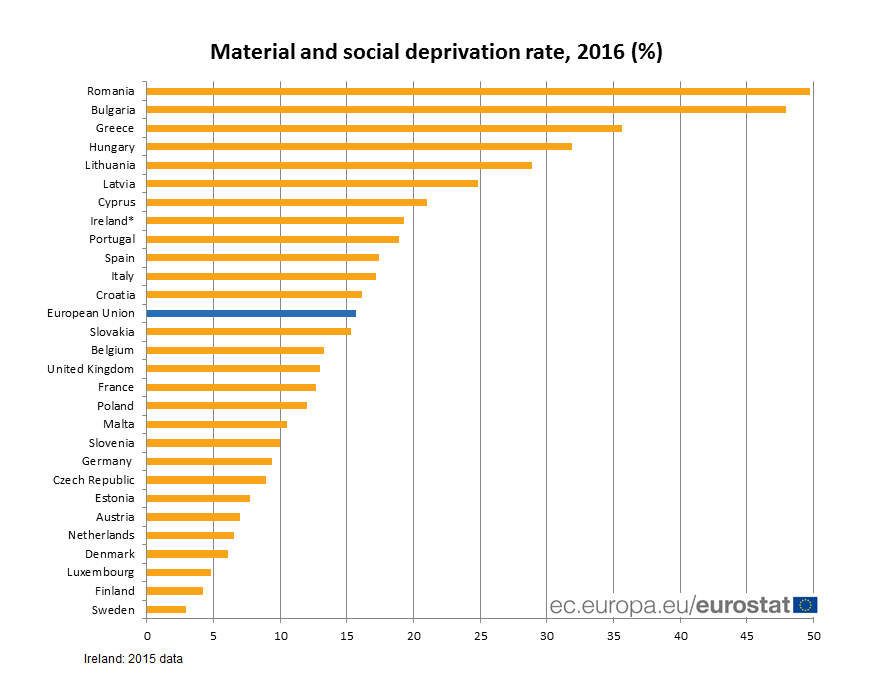 In all EU Member States, the material and social deprivation rate is higher among people with low (lower secondary or less) education level. 1 in 4 people (25%) with low education level in the EU suffer from the material and social deprivation, while this rate drops to 1 in 7 (14%) for those with upper secondary education and further to 1 in 20 (5%) among people with higher (tertiary) education, Eurostat continues.

Jan Švejnar: The Sky Is the Limit