However, students in Australia, Japan, Korea, New Zealand and the United States perform better in collaborative problem solving than would be expected based on their scores in science, reading and mathematics. But students in the four Chinese provinces that took part in PISA (Beijing, Shanghai, Jiangsu and Guangdong) do less well compared to their results in mathematics and science.

Girls do better than boys in every country and economy that took the test, by the equivalent of half a year’s schooling on average (29 points). On average across OECD countries, girls are 1.6 times more likely than boys to be top performers in collaborative problem solving, while boys are 1.6 times more likely than girls to be low achievers. This is in sharp contrast to the findings of the 2012 individual problem-solving test which found that boys performed better than girls. 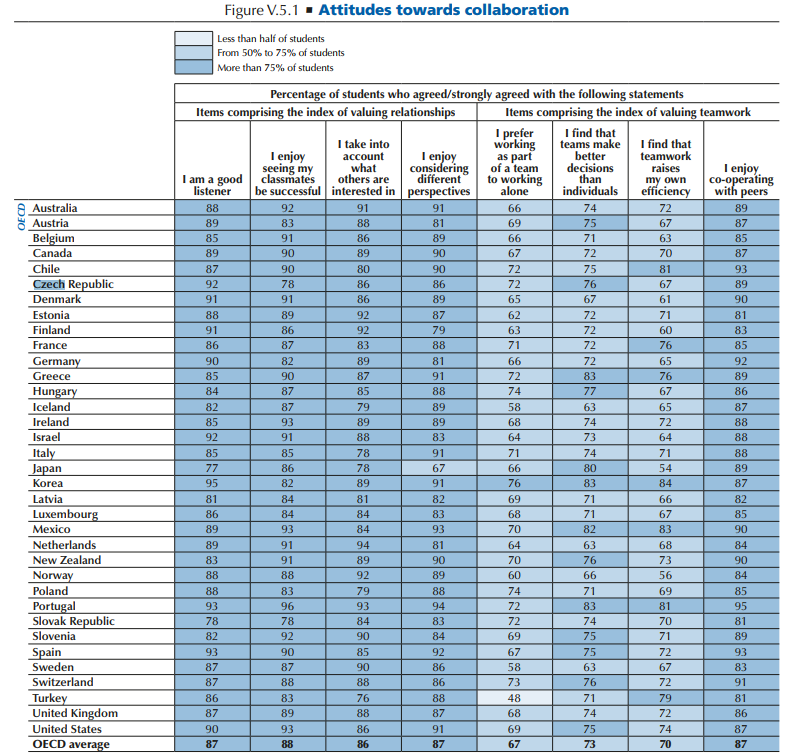 According to the OECD analysis of 15-year-olds worldwide, on average across OECD countries and after accounting for gender, and students’ and schools’ socio-economic profile, students who had attended pre-primary school have significantly higher values on the indices of enjoying and valuing cooperation and were more likely to agree or strongly agree with all of the items that comprise these two indices.

In the Czech Republic and Spain, for instance, students who reported that they are not threatened by other students score more than 14 points higher in collaborative problem solving than would be expected given their performance in other subjects.

Students in Costa Rica, the Dominican Republic, Japan, Korea and Mexico generally reported the most positive
relationships with their teachers...At the other end of the spectrum, students in many European countries, including the Czech Republic, Estonia, Hungary, Latvia and the Netherlands, reported the least positive relationships with their teachers. In these five countries, students perceived less teacher support, greater teacher unfairness, and a less positive disciplinary climate than did students in other OECD countries.