Today, the strongest growth in the robotics industry is in Asia – lead by China as the world´s number one marketplace. In 2017 robot installations are estimated to increase by 21 percent in the Asia-Australia region. Robot supplies in the Americas will surge by 16 percent and in Europe by 8 percent, the International Federation of Robotics says.

In terms of units, it is estimated that by 2020 the worldwide stock of operational industrial robots will increase from about 1,828,000 units at the end of 2016 to 3,053,000 units. This represents an average annual growth rate of 14 percent between 2018 and 2020. In Australasia the operational stock of robots is estimated to increase by 16 percent in 2017, by 9 percent in the Americas and by 7 percent in Europe. Since 2016, the largest number of industrial robots in operation has been in China. In 2020, this will amount to about 950,300 units, considerably more than in Europe (611,700 units). The Japanese robot stock will slightly increase in the period between 2018 and 2020. About 1.9 million robots will be in operation across Asia in 2020. This is almost equal to the global stock of robots in 2016.

According to IFR, in 2016, Czech manufacturers covered 2% of the global total supply of industrial robots.

Automation is here to stay - 1.7 million new robots to transform the world´s factories by 2020. Interesting, #Czechrepublic has 2.0% of the robots in the world - large majority of them ABB. https://t.co/zcXoT1MoeF #DigitalTransformation #robots pic.twitter.com/WFqnHJCLKt 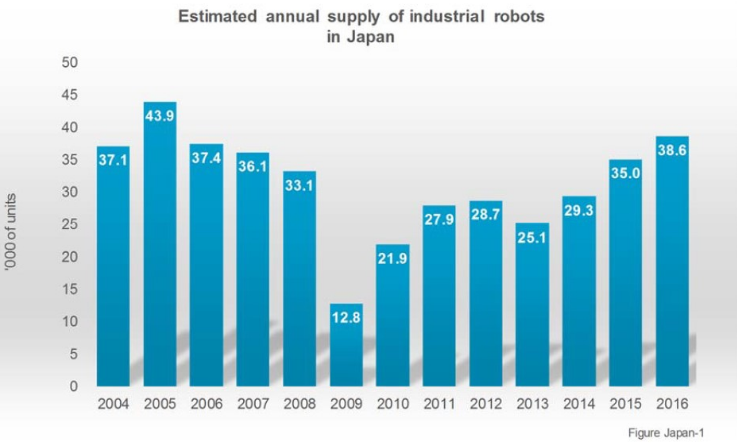