>> Full country profile is attached below.

According to the Czech Statistical Office, in 2018, total R&D expenditures in the Czech Republic increased by 14% year-on-year (CZK 12.4 billion) to CZK 102.8 billion, passing the threshold of CZK 100 billion for the first time. The total expenditures by enterprises, the government and the EU account for 1.93% of the Czech GDP. Over the past five years, the total expenditures on research and development have increased by a third, mainly due to the growth in the volume of funds invested by foreign-controlled companies. Since 2010, a total of CZK 450 billion was spent on research and development.

Behind the increase in expenditures is mainly the increase in wages of research and development workforce. The cost of labor in this segment makes up more than half of the total expenditures spent on R&D in the Czech Republic. Over the past five years, labor costs in R&D increased by two thirds, nominally from CZK 34 billion in 2013 to CZK 54 billion in 2018. In the same period, labor costs in R&D grew twice as fast as total R&D  investment.

Businesses focus their funds primarily on their own R&D and continue to make little use of the research capacities offered by public research organizations, the Czech Statistical Office says. In 2018, revenues of public universities, including teaching hospitals, from contracted R&D services for domestic enterprises reached CZK 900 million, in the case of public research organizations under the government sector (e.g institutes of the Czech Academy of Science) it was CZK 300 million. In both cases, this represents a negligible share (4.1% and 1.8% respectively) of the total expenditure on research activities carried out in these public research entities. More. 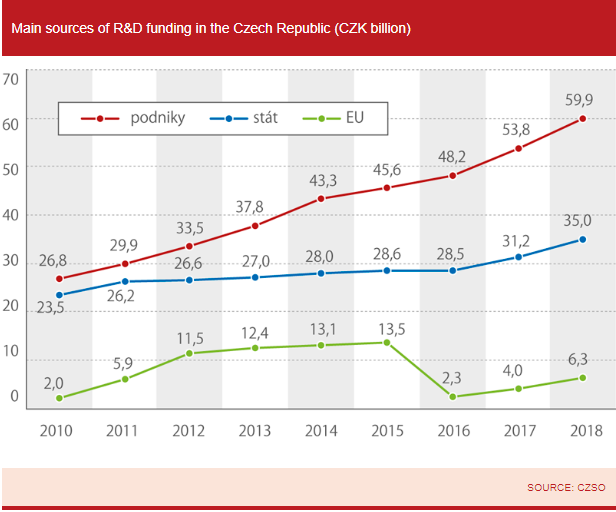 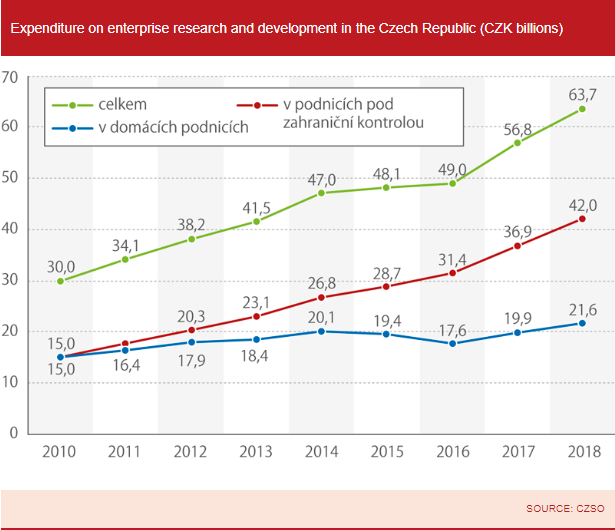