The Illicit Trade Environment Index measures the enabling environment for illicit trade that economies create through both action and inaction across four categories. The 2018 index has been expanded to cover 84 countries across the world. This tool allows users to explore the results for all of the economies included in the index.

With a score of 85.6 (out of 100), Finland ranks frst in the overall index, besting the United Kingdom by only 0.5 points. The rest of the top 10 is rounded out by a handful of European countries (Sweden, Austria, Netherlands, Denmark and Germany), along with the United States, Australia and New Zealand.

At the bottom of the overall index is a group of developing economies from all regions of the globe. Libya ranks 84th out of 84 economies, with a score of 8.6, and is joined by Iraq in 83rd place, scoring less than six points better.

Regionally, Europe (34 economies in the index), which includes the EU-28 plus six other countries, earns the highest the average score (68.0). The Asia-Pacifc (21 economies) comes second at 56.0 and the Americas (19 economies), including the US and Canada, is in third at 54.0. The Middle East and Africa (10 economies) is last among the regions, mainly due to low scores on the “supply and demand” and the “transparency and trade” indicators.

Among the four categories in the index, the highest average score (69.0) across all 84 economies is in “customs environment,” which measures how effectively an economy’s customs service manages its dual mandate to
facilitate licit trade while also preventing illicit trade.

The lowest average score (50.0) is in the “supply and demand” category, which measures the domestic environment that encourages or discourages the supply of and demand for illicit goods.

What the index, this paper and all the other papers published alongside it as part of the larger project, proposes is that economies that are laggards on the issue can start small and build towards a better environment for preventing illicit trade. And the economies that are leaders should lead. 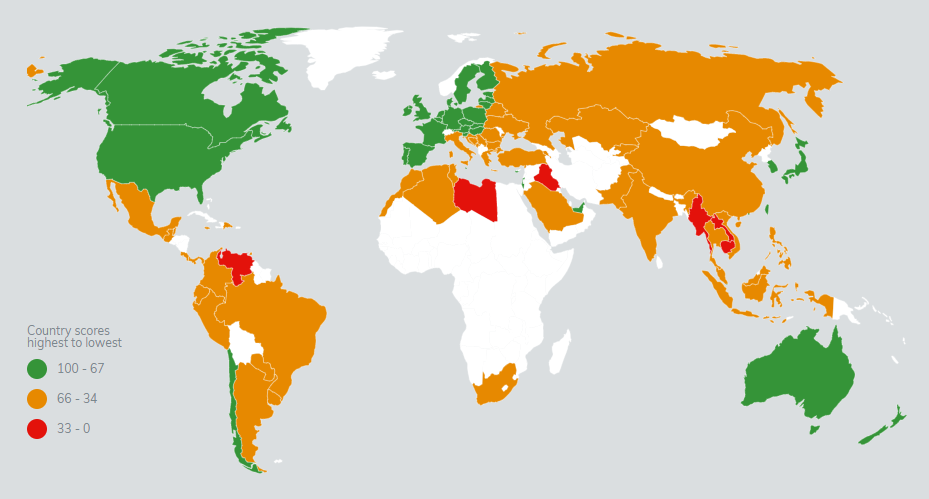 The Czech Republic ranks 23rd globally and 15th in Europe, reaching the lowest scores for categories Government policy (32nd) and Customs environment (29th) and the highest scores for Transparency and trade (21st) and Supply and demand (26th).