Key trends for Europe in 2017 include:

• FDI into Emerging Europe increased across project numbers (8%) and capital investment (17%), yet retained only 25% of total market share for projects.

• The number of FDI projects into Poland increased 24% to 338, ranking it fifth as a destination market for FDI into Europe. The country ranked top for FDI by job creation in 2017 with an increase of 53%.

• In 2017, Lithuania welcomed 61 new investment projects, a 27% increase from the previous year. 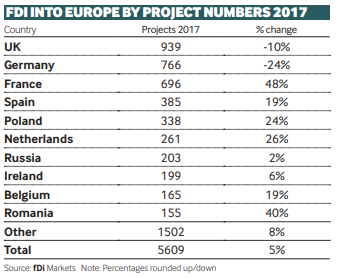 Courtney Fingar is editor-in-chief of fDi Magazine and head of content for fDi Intelligence, the Financial Times’ specialist unitdedicated to foreign direct investment
..."Looking at the FDI statistics from the past year, it is true that countries with governments branded as populist, such as the US and Poland, to name just two, are not putting off investors. Quite the opposite, as Poland is coming off a bumper year for greenfield investment levels and the US remains a global FDI leader. Other countries where politics are fractious and outsiders have raised concerns about rule of law, such as Romania, also had successful FDI years in 2017. Israel, always at the centre of geopolitical tensions, had a record year as far as our fDi Markets database reflects.

So, indeed: capital doesn’t mind so much about politics or rhetoric. But it does care about policy... To the extent that the US’s trade policy becomes unstable or protectionist in a way that does not favour corporate interests (and a trade war most certainly does not), then the knock-on effects on FDI might come. Trade and investment have an incestuous relationship." (full version of the comment is inside the report)