Prague Joined the TOP 10 Meetings Destinations of the World

Prague has succeeded in the global competition and occupied the eighth place in the ICCA ranking of the most popular congress destinations. In 2017, according to the Czech Statistical Office, 4,127 conferences were held in the Czech capital, representing a third of all the events that took place in the Czech Republic. More than half a million delegates participated in the Prague conferences, according to Prague Convention Bureau.

Prague has moved three positions up since 2016 and ranked among the world's TOP 10 meeting destinations such as Barcelona, Paris, Vienna, London and Singapore.

Prague has been ranking close to the 10th position in the list of most popular meeting destinations, together with the world’s meeting industry élite in the long term. Barcelona has occupied the first position this year, followed by Paris, Vienna, Berlin, London, Singapore and Madrid. Lisbon and Seoul complete the list of the top ten destinations.

In 2017, according to the Czech Statistical Office, 4,127 conferences were held in the capital of the Czech Republic, representing a third of all the events that took place in the Czech Republic. More than half a million delegates participated in the Prague conferences. The Prague Convention Bureau statistics, based on data collected from its member entities, show that Prague, in the long run, has had a stable ratio of international (49.2%) and local events (50.8%). In 2017, meeting delegates from abroad arrived to Prague most frequently from the USA, Great Britain, Germany, Switzerland and France.

"Prague belongs among destinations very popular with pharmaceutical, industrial or business meetings. Small corporate meetings with participation of between 10 and 149 delegates predominate over large association events. 50 congresses with an attendance of more than a thousand participants took place in Prague last year. The most popular event seasons are spring and autumn dates, with May as the favourite month in 2017," adds Roman Muška, Managing Director of Prague Convention Bureau. 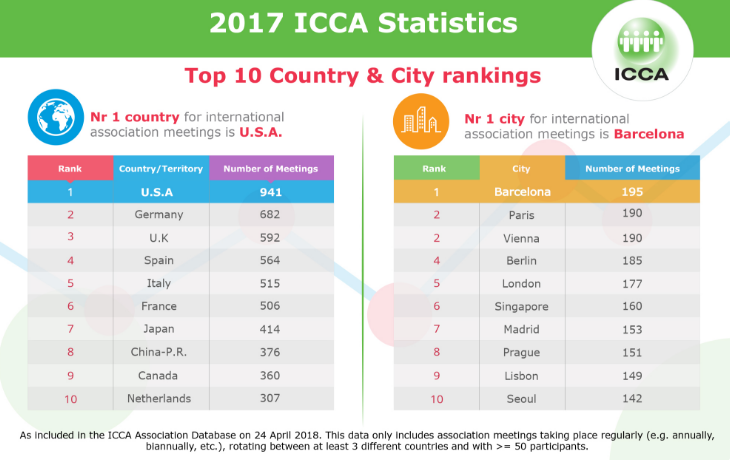