Whereby Pilsen and Prague are among regions with the lowest unemployment rate in the country, Pilsen has the lowest and Prague the third lowest. This poses problems for logistics occupiers to secure labour. In the Pilsen region unemployment reached 2.62% while in Prague 2.95%. The Pilsen region and Prague are benefitting strongly from the boom of e-commerce along with retail in general and its connected logistics services. This is reflected in the larger-sized requirements of occupiers. The availability of labour has become a key criteria for many tenants of storage space. The highest unemployment rate is found in the Ústí nad Labem region (6.33%), followed by the Moravia-Silesia region (6.29%) albeit, as in the rest of the country, unemployment rate are declining in these areas.

Higher availability of labour together with the completion of the D8 highway leading to Germany increases the attractivness of the Ústí nad Labem region for logistics and storage uses. Within the Greater Prague area there is a lack of large warehouses readily available to service the demand of larger requirements. The vacancy rate for self-contained units of over 10,000 sq m is 0%. In the entire Czech Republic there are only 5 projects offering self-contained halls in excess of 10,000 sq m. Although speculative construction is increasing, the majority of development is still build-to-suit for occupiers and even the space that is started speculatively finds occupiers during construction phase. 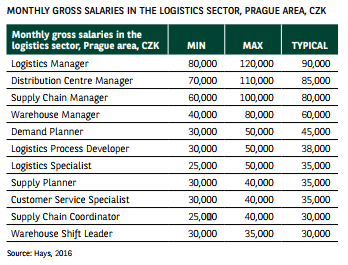 Major deals in H1 2017 included pre-lease of 4PX in VGP Park Jeneč (66,200 sq m), renegotiations of HOPI in P3 Prague D1 (41,300 sq m) or Kuhne + Nagel in CTPark Teplice (17,100 sq m). E-commerce is expected to remain the key demand driver in 2017 and beyond. E-commerce sales recorded a strong growth of 21% with 98bn CZK. Thanks to a relatively low share of e-commerce on total retail sales (9.5%), online sales are likely to grow at a fast pace. The online retailing has a significantly higher share in the most Western European countries compared to Czech Republic.

Industrial developers are reacting to the labour shortage and are trying to offer occupiers value added services to help them to attract and retain workforce. Interviews undertaken with major 3PLs show that they struggle with finding suitable workers across all locations. Securing labour will thus be a major pre-requisite for sustaining high levels of take-up and the strong performance of the Czech logistics market vis-à-vis the competition of other countries within the region, BNP Paribs Real Estate writes.

CTP is now leasing additional 70,000 m2 in CTPark Bor, one of the 4 biggest parks in CEE

White & Case advises Avast on US$9.2 billion Merger with NortonLifeLock