Home > Competitiveness > Business and Industry > PwC and the Urban Land Institute: Emerging Trends in Real Estate 2019: “People are beginning to think about Prague not too dissimilarly from western European markets."

PwC and the Urban Land Institute: Emerging Trends in Real Estate 2019: “People are beginning to think about Prague not too dissimilarly from western European markets."

In recent years investor perceptions of Prague have undergone a gradual transformation, with the Czech capital’s erstwhile emerging market status fading into distant memory, Emerging Trends in Real Estate 2019 report by PwC and the Urban Land Institute says. “People are beginning to think about Prague not too dissimilarly from western European markets,” suggests an interviewee. “It has become fairly fully-priced, but we would think about doing core acquisitions there.”

A central European investor describes the city as a “solid, major market” where “prices are high and yields are low”. Prime high street retail yields have come in to 3.5 percent, while office yields have hardened to 5 percent or less.

Investors’ impressions of solidity are underpinned by both national and local factors. Czech economic growth, while forecast to slow somewhat in 2019, is expected to remain comparatively robust at around 2.9 percent, and the country’s unemployment rate, pegged by Eurostat at 2.4 percent in June 2018, is among the lowest in the EU.

Meanwhile the supply of new office space in Prague is constrained: “There is a bit more pipeline than you would normally expect in a western European country, but it is far more limited than it used to be,” says an interviewee. Another adds: “Companies usually stay there for a long time and don’t move too much from one building to the next.” 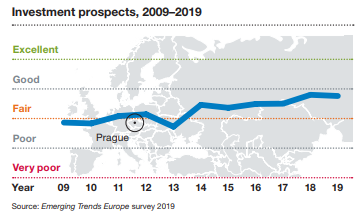 Strengthening demand and limited development is boosting occupancy. “We haven’t seen real rent increases in 10 years in Prague, but the pressure is there now,” says a local player.

And while the movement in cap rates has reduced Prague’s relative attractiveness for some potential investors, to others pricing still appears reasonable compared with core property in other European capitals: “I think Warsaw and Prague are
markets where people with a fresh mind and no preconceptions can imagine a 4 percent yield,” argues a regional player.

AmCham Manufacturer's Council: "We see the need and we want to change how we do business, but it will be almost impossible to achieve the necessary change unless governments feel the same."

Demand for warehouses in the Czech Republic is breaking records. Developers are responding with extensive construction