The World Bank/European Commission report compares business regulation for domestic firms in 25 Cities in Croatia, the Czech Republic, Portugal and Slovakia with 186 Other Economies. 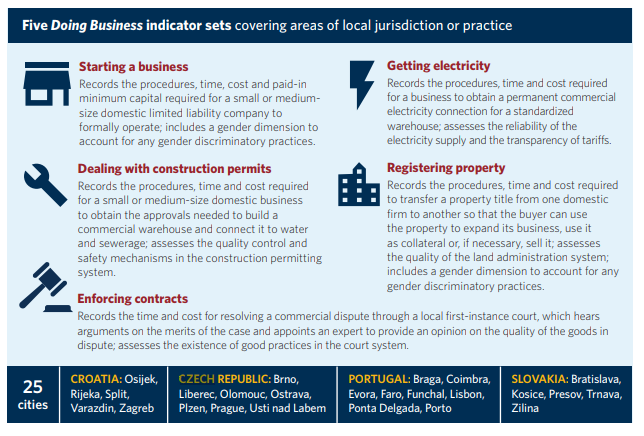 How does subnational performance vary within the Czech Republic?

Among the seven cities benchmarked in the Czech Republic, it is the country’s three largest—Prague, Brno and Ostrava—where doing business is easier across the five areas measured. Prague ranks first in two areas (getting elektricity and enforcing contracts), while Brno ranks first in dealing with construction permits and Ostrava in registering property. This demonstrates the potential for large cities to achieve regulatory efficiency and quality by capitalizing on economies of scale and investing in administrative modernization.

Of the four member states covered by this study, the Czech Republic shows the largest subnational difference at the aggregate level: Prague, with the highest aggregate distance to frontier score among the seven cities, and Liberec, with the lowest, are separated by nearly six points. The largest variation is in getting elektricity. This results mainly from differences in the type of connection most likely for a new warehouse like the one in the Doing Business case study. In five of the seven cities such a warehouse typically connects to the medium-voltage network and requires a process involving greater time and cost than the EU average.

Completing the connection process can take nearly eight months (as in Usti nad Labem). The delays are due mainly to the time spent obtaining the multiple municipal permits required. Moreover, the entrepreneur needs to cover the entire up-front cost—including the purchase of a substation—which can reach 283.2% of income per capita (as in Ostrava). Only in Brno and Prague is the warehouse likely to connect to the low-voltage network. This makes a substantial difference: in Prague the proces can be completed in two months, at a cost of 25.9% of income per capita.

Appreciable within-country differences also emerge in starting a business, dealing with construction permits and enforcing contracts, three areas in which the Czech cities lag behind their EU peers. Indeed, in these three areas even the best performer among the Czech cities has a distance to frontier score lower than the EU average.

Time is the main source of differences among the Czech cities in the ease of starting a business, and the registration with the tax authority is what drives the variation. Income tax registration usually takes one to five days. But for value added tax (VAT) registration, applicants can wait from 10 days in Olomouc and Usti nad Labem to 18 days in Prague, where application volumes are highest. All the cities require the same eight procedures to open a business; among EU member states, only Germany requires a higher number (nine).

Dealing with construction permits requires either 20 or 21 procedures, with the additional procedure being an informational meeting that investors typically request with the municipal environmental department to clarify potential environmental impact assessment requirements. The number of preconstruction approvals required in the Czech Republic, 13 on average, is the highest among EU member states. This causes substantial delays. In Olomouc, where the proces is slowest, dealing with construction permits takes nine months. The proces is faster in Brno, thanks to more efficient communication between the municipality and developers and faster processing times for obtaining a zoning permit and completing the required preconstruction approvals. Moreover, the utility company in Brno takes less time to identify potential connection points because it has more up-to-date infrastructure maps than those in the other cities.

Enforcing a contract takes the least amount of time in Prague, but even there it takes more than 22 months—longer than the EU average. In Brno the same process takes over 5 months more. Moreover, among EU member states, only the United Kingdom has a higher cost for contract enforcement than the Czech cities do.

In registering property the Czech cities show homogeneous results—and all of them have a distance to frontier score higher than the EU average. The results vary only in the time the process takes, which depends mainly on the efficiency of the local cadastral office: the time required to register a property transfer like the one in the Doing Business case study ranges from 23.5 days (in Ostrava) to 27.5 days (in Plzen and Prague).

AmCham Real Estate Council: For us to become an innovative economy, the way we plan to use our land must also be innovative

AmCham Real Estate Council Intel session: "Unless the salaries and the economic output of the country rise, it is difficult to generate more tax per capita."

Andy Hunder, AmCham Ukraine visiting AmCham Czechia: The government and business community in Ukraine are ready to tell the world the time to return is now