At the top of the 2017 EU Social Justice Index published by the Bertelsmann Stiftung are the northern European states of Denmark, Sweden and Finland. Rounding out the top group are the Czech Republic, Slovenia, the Netherlands, Austria and Germany, while Greece, despite again posting slight gains this year, remains clearly in last place.

Denmark, Finland and the Czech Republic are the three best-scoring countries in the area of poverty prevention, the report says. Education performance has steadily declined in Hungary and the Czech Republic since 2008. Though the Czech Republic still scores slightly above the EU average, in this year’s survey, experts point out that “Educational outcomes, and the employability of school and higher education graduates are generally good. One problem, however, is the low  tertiary education attainment rate. Moreover, education outcomes are strongly influenced by students socioeconomic backgrounds."

The Czech Republic, Lithuania, France, Slovenia and Austria form the strong top group on the measure 'Discrimination against people with disabilities'.  In the area of health, Sweden, Germany and Luxembourg hold the top three places. The Netherlands, Malta, Belgium, the Czech Republic and France also belong to the expanded top group, the report says. 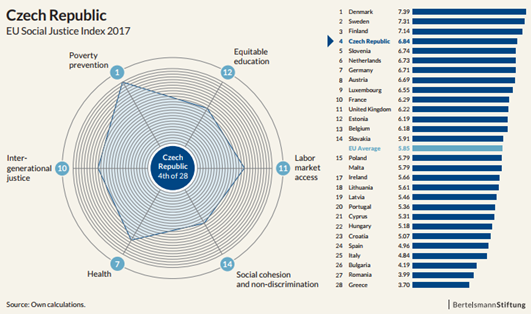 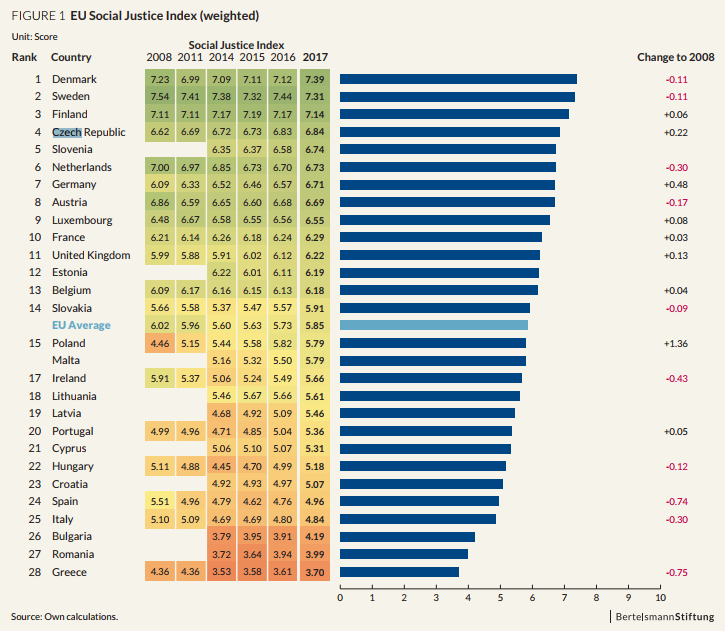 The contours of this policy achievement can be seen across a range of related indicators. The share of children and youth
(under 18) at risk of poverty or social exclusion is 17.4%. Those 65 or older fare particularly well, with a comparatively low 10.1% at risk. In terms of income poverty, a relative advantage can again be seen. The Czech population, as a whole, is the least at-risk-of income poverty: only 9.7% receive 60% or less of the median income (after social transfers). Among the populations under 18 and seniors these rates respectively increase to 14.7% and decrease to 8.1%. The SGI country experts attribute this success “to a favorable employment picture and a still rather redistributive social policy. There are, however, “substantial differences between regions and ethnic groups. Since 2006, the number of areas of social exclusion (defined as those where more than 20% of inhabitants live in inadequate conditions) has doubled to about 600, now covering more than 100,000 people. In more than half of these areas, Roma form a majority.” 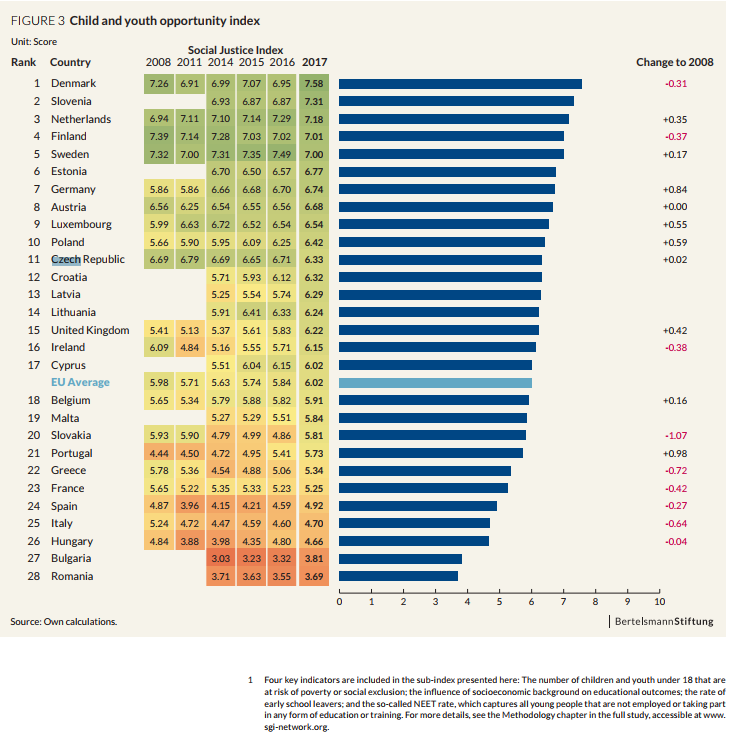 The picture is more mixed when it comes to labor market access (score: 6.46, rank: 11). The Czech government ranks among the top ten on several indicators assessing access to the labor market. In 2016, the Czech Republic’s unemployment rate of 4.0% ranked 1st in the EU. The percentage of unemployed who have been out of work for a year or more, 1.7% (rank: 4), likewise appears to be progressively readjusting to below pre-global financial crisis levels. Youth unemployment, which has remained persistently higher, was 10.5% in 2016, a marked improvement over the 19% seen in 2013.

In line with these trends, the overall employment rate in 2016 was higher than it had been in 2007 (72.0% versus 66.1%). Yet, not all of our labor market measures paint such a rosy picture. For instance, those in temporary employment involuntarily make up 79.9% of all temporary workers (2016), a 16 percentage point increase over 2007. Those with less than upper secondary education were unemployed at a higher rate (19.2%), but have witnessed an improvement over 2013, when the share was 23.4%. “[G]roups such as parents with small children, low-skilled workers, people with disabilities and Roma are still strongly disadvantaged on the labor market. Parents with small children and single parents are hampered in labor force participation by a shortage of affordable child-care services together with the limited use of flexible working hours. Low-skilled employment has suffered from tax disincentives, a weak capacity of public employment services and low regional mobility.”

Read more details in the full report, including country profiles.