Home > Competitiveness > Employment and Social Affairs > Eurostat: 46.4% of employed persons in the Czech Republic participated in training courses related to their jobs

Eurostat: 46.4% of employed persons in the Czech Republic participated in training courses related to their jobs

In 2016, the Netherlands (61%), Sweden (59%) and Finland (58%) had the highest participation rates in job-related training. The Czech Republic ranked 5th among the EU member states with 46.4% participation rate. The lowest rates were in Greece and Romania (8% each) as well as Italy (11%). In almost all Member States, the share of women in employment who attend job-related training is higher than the share of men, with the largest differences being recorded in Lithuania (44% women compared with 31% men), Estonia (51% women compared with 39% men) and Latvia (39% women compared with 29% men), according to Eurostat. 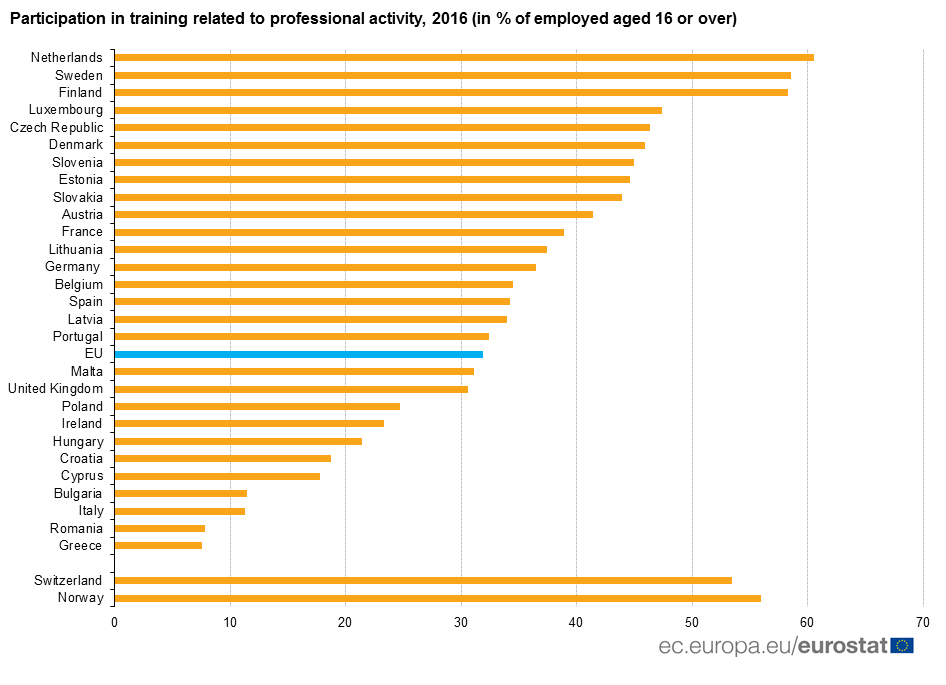 More details in Czech by e15.cz: "When it comes to foreign languages, the motivation is clear. We are an export-oriented economy and the command of the Czech language only is insufficient. Moreover, foreign languages learning at our public schools is not of the highest quality, so we are catching up during employment," says Vítězslav Bican, chairman of the Association of Language Schools and Executive Director, Channel Crossings.

"According to our survey, 30% of Czech employers find it difficult to fill vacancies. There has been pressure in this sense", says Jaroslava Rezlerová, Country Manager, ManpowerGroup Czech Republic, adding that „(the Eurostat data) is very good news showing that businesses and the public sector have realized how important it is nowadays to focus on constant employee development.“