In 2016, there were ten EU Member States where the proportion of young female NEETs (neither in employment nor in education) was at least 10.0 percentage points higher than the corresponding share for young men. Among these, the difference between the sexes was within the range of 10–12 percentage points in the United Kingdom, Poland and Malta, rising to 13–15 points in Greece, Estonia, Romania and Hungary, before peaking at 17.2 in Slovakia and 20.0 points in the Czech Republic; an even wider gender gap was recorded in Turkey (38.3 points).

Among people aged 25–29 and those aged 30–34, female NEET rates were consistently higher than male NEET rates in all of the EU Member States. For the first of these two age groups, the biggest gender gaps were recorded in Estonia, Slovakia and the Czech Republic, where NEET rates for women were 18.9–23.2 percentage points higher than those for men. The differences between the sexes were generally more pronounced among people aged 30–34, as gender gaps of more than 20.0 percentage points were recorded in Slovakia, Hungary and Malta, while the gap in the Czech Republic rose to 28.4 percentage points. 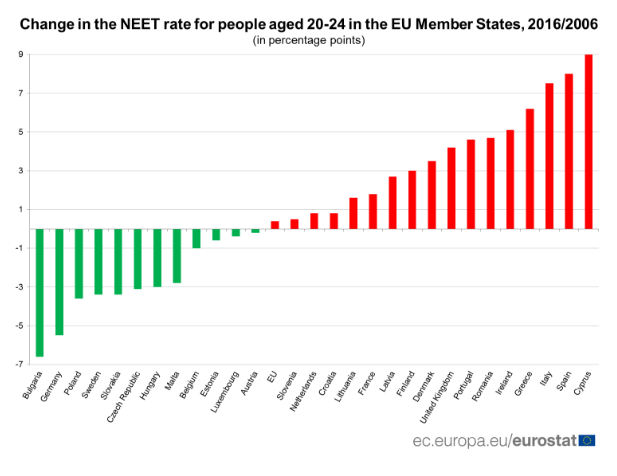