In 3Q 2017, median gross monthly wage in the Czech Republic amounted to CZK 25 626, which was an increase by 7.2% compared with the same period of 2016, according to Trexima, based on data in the Information System on Average Income (ISPV) that includes data on median wages. The average gross monthly wage grew by 6.3% to CZK 30,066.

The biggest difference between median and average monthly gross wage was recorded in the private sector in the banking and insurance sector, where the gap reached CZK 11,652 per month. There are professions in the information and communication sector where the monthly average wage was 10,012 CZK higher than the median wage. 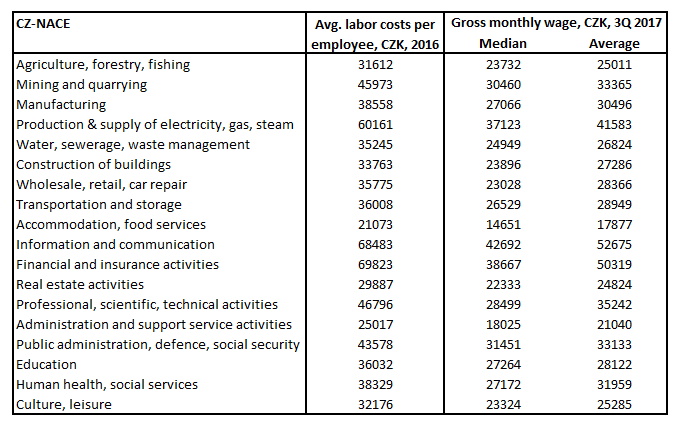 The second fastest increase in labor costs over the past 8 years was in accommodation and hospitality (24.49%). In this sector, however, labor cost per employee per month is the lowest in the long run. In the finance and insurance sector with the highest labor costs (69,823 CZK), and thus the highest wages, the increase between the years 2009-2016 amounted to 9.46%, the third lowest figure. The information and communication activities sector with the second highest labor costs (CZK 68,483) has seen an increase of 13.36% in 2009-16. The lowest growth rate of 5.27% was seen in real estate activities (CZK 29,887).

Meanwhile, the Czech Statistical Office (ČSÚ) published a regional analysis of wages for 2016 that raises the question, according to idnes.cz, why the average wages in the Moravian regions are not higher, when we look at the relatively high number of those with attained tertiary education. The reason is that labor markets in these regions are already saturated with university students. The economic structure is different in each region. For example, the Karlovy Vary Region has a very small proportion of those with attained tertiary education, but cannot attract new ones because the earnings offered are below the national standard, idnes.cz says.

On the other hand, in Prague, where more than a third of people have at least a bachelor's degree, their number is insufficient and the capital city is trying to attract more those with tertiary education by offering them higher earnings. The most educated workforce moves to Prague or commutes to work from the surrounding area, which is the secret behind the macroeconomic indicators that distinguish Prague from the rest of the country. But the drawbacks are the high prices of housing and services that those less educated can hardly afford from their wages, idnes.cz comments on ČSÚ data.