The index published in Economic Freedom of the World measures the degree to which the policies and institutions of countries are supportive of economic freedom. In 2016, the latest year included in the analysis, Hong Kong and Singapore, as usual, occupy the top two positions. The next highest scoring nations are New Zealand, Switzerland, Ireland, United States, Georgia, Mauritius, United Kingdom, Australia, and Canada, the latter two tied for 10th spot. It is worth noting that the United States returned to the top 10 in 2016 after an absence of several years. Canada also returned to the top 10 after coming in 11th in 2015.

The rankings of some other major countries are Germany (20th), Japan (41st) Italy (54th), France (57th), Mexico (82nd), Russia (87th), India (96th), China (108th), and Brazil (144th). The Czech Republic ranked 30th based on 2016 data and obtained the highest scores for category Freedom to Trade Internationally. The country obtained lower scores for category Size of the Government and sub-category Business Regulation (Administrative requirements, Extra payments/favoritism). A country profile is available in the report. 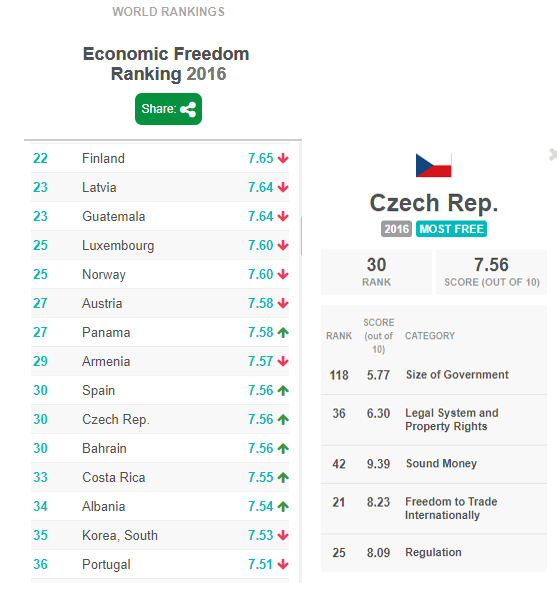 A summary in Czech.

The index published in Economic Freedom of the World measures the degree to which the policies and institutions of countries are supportive of economic freedom. The cornerstones of economic freedom are personal choice, voluntary exchange, freedom to enter markets and compete, and security of the person and privately owned property. Forty-two data points are used to construct a summary index and to measure the degree of economic freedom in five broad areas.

Area 1: Size of Government
As government spending, taxation, and the size of government-controlled enterprises increase, government decision making is substituted for individual choice and economic freedom is reduced.

Area 2: Legal System and Property Rights
Protection of persons and their rightfully acquired property is a central element of both economic freedom and civil society. Indeed, it is the most important function of government.

Area 3: Sound Money
Inflation erodes the value of rightfully earned wages and savings. Sound money is thus essential to protect property rights. When inflation is not only high but also volatile, it becomes difficult for individuals to plan for the future and thus use economic freedom effectively.

Area 4: Freedom to Trade Internationally
Freedom to exchange—in its broadest sense, buying, selling, making contracts, and so on—is essential to economic freedom, which is reduced when freedom to exchange does not include businesses and individuals in other nations.