How to restart national economies during the coronavirus crisis

Around the world, life as we know it has changed drastically. Global leaders and millions of citizens are facing the challenge of a lifetime. The COVID-19 pandemic is threatening not only healthcare systems, but also the livelihoods of citizens and the stability of economies.

As our colleagues wrote in “Safeguarding our lives and our livelihoods: The imperative of our time,” the shock to our lives and livelihoods from the virus-suppression efforts could be the biggest of the past 100 years. If we do not stop the virus, many people will die. If attempts to stop the pandemic cause severe damage to social and economic networks, people will experience large-scale suffering in the medium and long term. The world must act on both of these fronts—suppressing the virus and mitigating the negative impact on citizens’ livelihoods—at the same time. The progress we make on those fronts will determine the shape of the economic recovery (Exhibit 1). 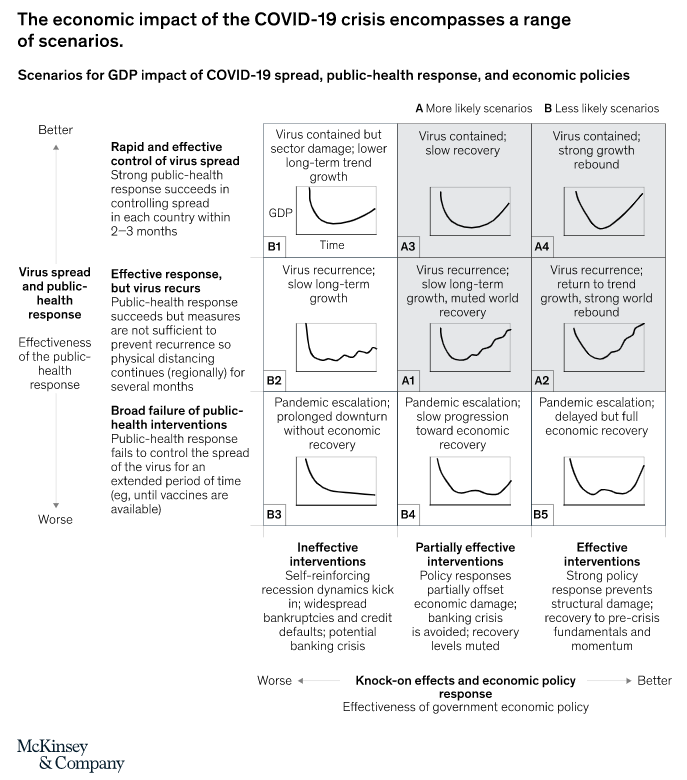 So far, most governments, businesses, and citizens have rightly focused on saving lives. We have seen a range of responses, from drastic (the complete lockdown of the Wuhan region in China) to more gradual (restrictions on public gatherings and the promotion of physical distancing in some European countries and North America). Other countries such as South Korea have followed a third path. Based on massive testing and contact tracing, this approach has allowed them to control the spread of the virus without imposing widespread restrictions on public movement, at least so far. In Latin America, some countries reacted quickly and ordered weeks of complete lockdown while case numbers were still relatively low, with the goal of flattening the curve and reducing the speed of transmission.

Countries are also coming to grips with the second imperative: saving livelihoods. Many countries have responded with unprecedented levels of both fiscal and monetary stimulus to blunt the economic impact of the crisis. For example, the United States recently passed a $2 trillion stimulus package.

Yet tremendous uncertainty remains about what to do next, on both fronts. Most national health systems, particularly in some emerging markets, are insufficiently prepared for the task at hand. Countries thus face daunting questions: Should the quarantine continue? If so, for how long? Should it be a blanket quarantine for all regions and age groups? Many countries have large, informal economies, crowded living conditions, or high levels of household debt. Some have all three. How should they proceed?

The second imperative—saving livelihoods—is just as perplexing. Should all economic sectors receive the same treatment? How do we restart the economy in some geographies without resurgence of the virus? What systems need to be in place to restart safely?

In this article, we propose two frameworks for restarting an economy. The first is designed to help governments, the private sector, and nonprofits think through when to open their economies, and the second outlines an approach for how to do so.

Many countries are still in the depths of crisis, with hundreds of deaths every day. But others seem to be flattening the curve. Given what’s at stake, it’s not too soon to begin thinking about what it will take to restart the economy. In the words of perhaps the greatest wartime leader in history, “This is not the end. It is not even the beginning of the end. But it is, perhaps, the end of the beginning.” Governments worldwide should recognize the hard work still to come and adequately prepare for the next phases of the crisis.

Prioritizing both lives and livelihoods: When to release constraints?

The threat of COVID-19 to lives and livelihoods will fully resolve only when enough people are immune to the disease to blunt transmission, either from a vaccine or direct exposure. Until then, governments that want to restart their economies must have public-health systems that are strong enough to detect and respond to cases. Leaders should recognize that regions may differ significantly in their readiness to restart their economies.

The first and most obvious factor in determining readiness is the number of new cases in a given area. Regions with significant ongoing transmission should expect that restarting economic activity will only lead to more transmission. Case numbers and, more importantly, hospitalizations need to be low enough for a health system to manage individually rather than through mass measures.

A second factor in thinking about this is the strength of the systems in place for detecting, managing, and preventing new cases. Elements of these systems include the following:

These elements can be combined to provide a measure of strength for public-health systems. If we combine a system’s level of strength with an assessment of the intensity of virus transmission, we can evaluate any region’s readiness to restart activity (Exhibit 2). These two dimensions determine four stages of readiness to reopen the economy, with Stage 4 the least ready and Stage 1 the most. One broad observation on countries’ varying stages of readiness: many emerging markets are especially concerned with the question of how to add ICU capacity. 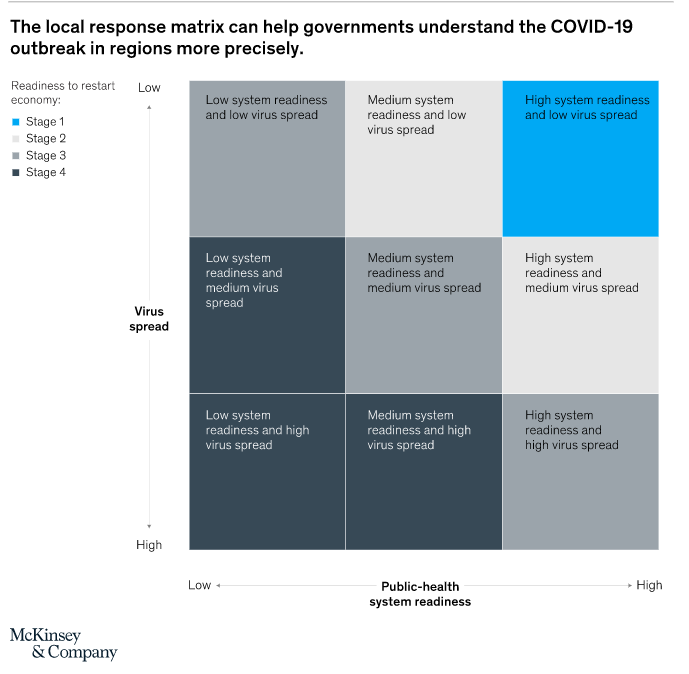 Response leaders can plot subnational regions (states, counties, cities, hospital-influenced zones, and so on) on this matrix to evaluate when each can restart some measure of economic activity. Regions with strong public-health systems and few or no cases, where tracking and isolation of transmission chains are still feasible, might behave differently than regions with weaker public-health systems that are further along on the epidemic curve. In many emerging-market countries, including several in Latin America, many elements are important but the main obstacle is ICU capacity. Achieving the necessary capacity requires highly coordinated efforts and a detailed management system.

Positions on the matrix will not be static; regions will move upward as case numbers fall and better control mechanisms are established, and to the right as public-health systems strengthen.

The matrix does not offer absolute guidelines but may be a useful tool to aid decision making. Governments can update the matrix every day, using real-time data. A robust management-information system can help countries use their own data to tailor their response to local realities.

In time, other scientific breakthroughs could also transform this dynamic—an effective vaccine, an accurate antibody test, significant new treatments for COVID-19—assuming they are available at scale and deployed widely. This article does not factor in this impact.

Exhibit 3 illustrates the path that a large city, region, or other geography might take toward economic readiness. 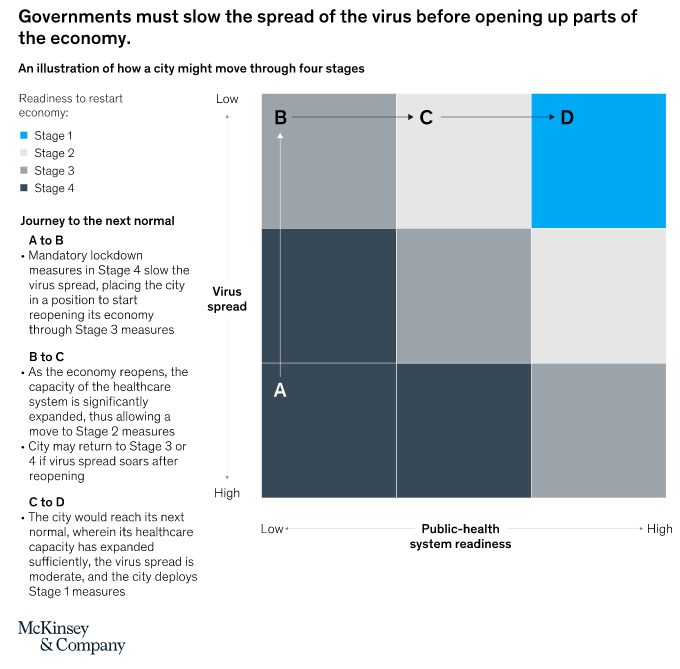 Countries may also have to choose adequate metrics to measure virus spread. The optimal metric would be the rate of transmission, but this demands a large testing capacity that may not be available to some countries. Alternative metrics might include the case growth rate and the cumulative total of cases.

Exhibit 4 shows how one country might look on the matrix. In this example, many regions need to maintain strong measures until the speed of the transmission slows. Other regions do not need to undergo the same restrictions and could potentially resume some of their economic activity. When coupled with an understanding of each region’s relative economic importance, as we describe below, this information enables leaders to quickly identify places where more jobs are at stake—which in turn may help leaders prioritize efforts on building healthcare capacity. 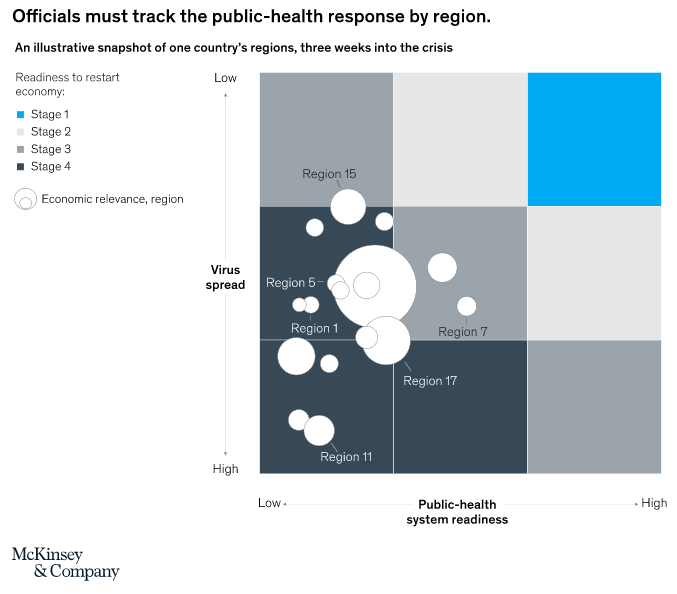 In summary, regions can be categorized into four stages of readiness to reopen parts of the economy (Exhibit 5). For each stage, leaders can define the level of intensity of actions to be taken, allowing them to adjust policies and specific actions. Furthermore, the local-response matrix allows for coordination of policies among regions and avoids conflicting solutions that could exacerbate the transmission. It could also offer citizens and businesses an idea of what to expect, which in turn can facilitate economic actions on a mass scale with fewer hiccups. 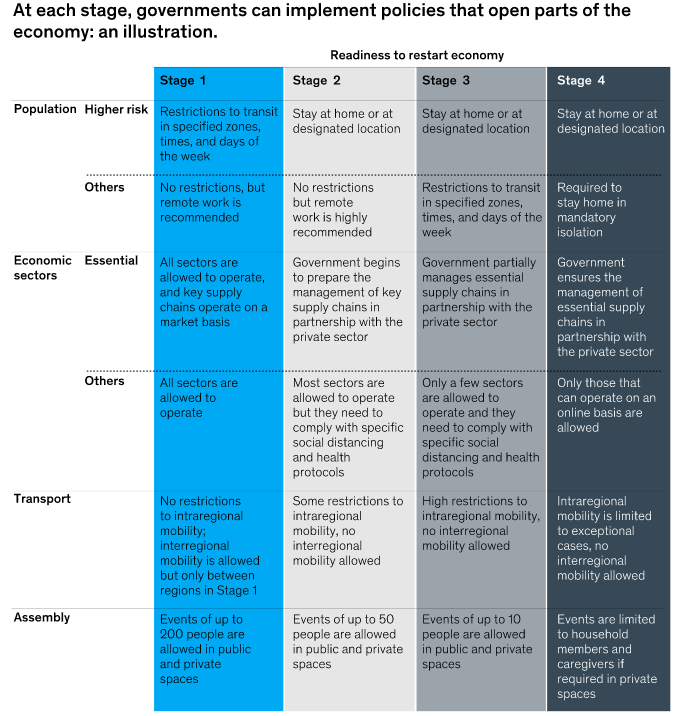 With an understanding of each region’s economic structure, governments can quickly identify places where the economy can be restarted. To do that well, governments can assess both the risk of transmission and the relative economic importance of each sector. For instance, authorities might define importance using metrics such as total employment, vulnerable jobs, or contribution to the economy (Exhibit 6).1 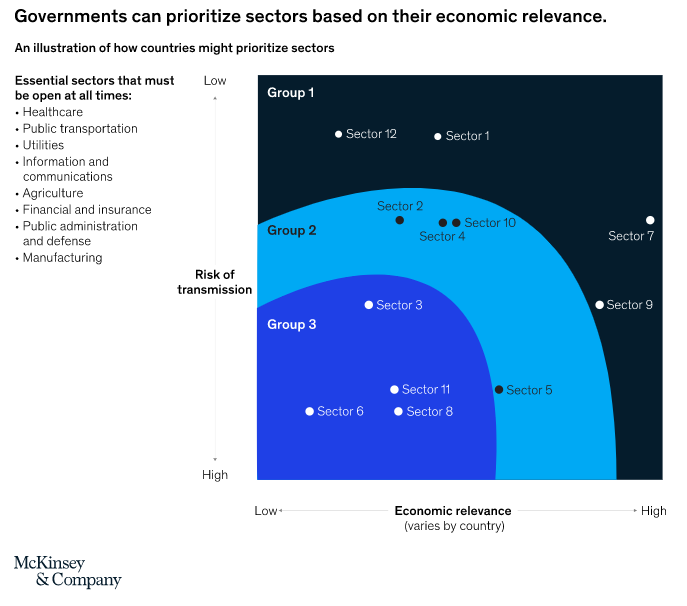 This analysis might require further elaboration for subsectors and individual jobs. A characterization at this level of detail could minimize the loss of jobs that entail only a low risk of transmission.

Some strategic sectors of the economy will need to operate even in lockdowns, including healthcare, defense and security, and procurement of strategic goods and services such as food, medicine, energy, water, gas, and communications. Remaining sectors can be gradually reopened regionally, as the public-health crisis abates. One group could start operating as a region’s readiness moves from Stage 4 to Stage 3. A second group could start operating once the region is in Stage 2, when the risk of transmission is relatively under control. Others could open later, once the speed of transmission has been minimized or clear protocols have been created to account for the activity’s higher risk of transmission.

When sectors start to go back to work, leaders must institute health and behavioral protocols to lower the potential for further transmission. In almost every sector, businesses will need protocols to maintain physical distancing and prevent a resurgence of new cases: remote work, hygiene- and health-oriented guidelines, frequent monitoring of people’s temperatures for early detection of new cases, reporting of relevant information to the health authorities, and enforcement measures to guarantee compliance. Indeed, the adoption of these protocols and others can heavily influence a sector’s position on the matrix. Jobs can be redefined in ways that make them safer to restart.

Additionally, each sector and subsector may need to implement specific requirements and procedures to guarantee the health of workers and the rest of the community. Public-health leaders and industry associations could work together to design protocols for each subsector in the days before the quarantine is lifted. They could also collaborate to provide resources that educate citizens and workers on how to apply those protocols.

Technology will play an important role in “licensing” people to return to work, but each country will have to consider privacy issues in introducing such systems.

Exhibit 7 illustrates general and sector-specific protocols to restart operations. These recommendations are based on McKinsey research and the experiences of several Asian countries—such as China, Japan, Singapore, and South Korea—that have begun to use them. 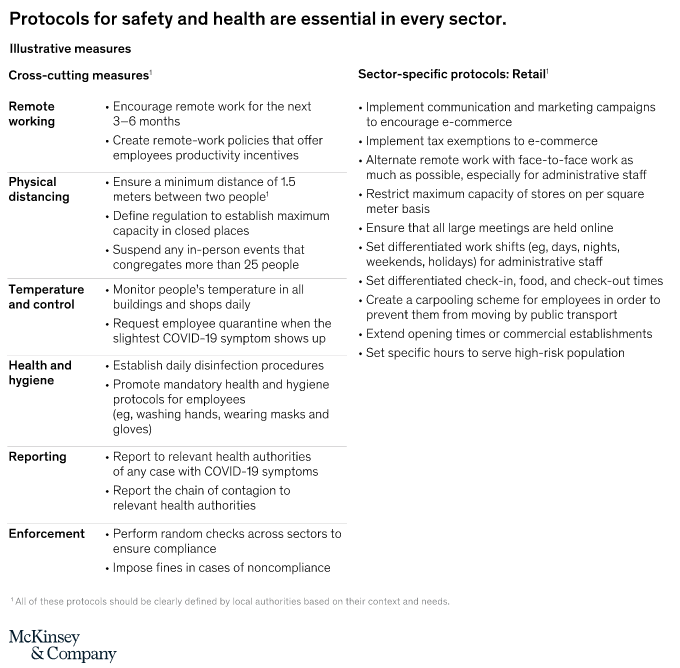 Countries need to introduce an additional level of granularity to their efforts to protect lives and livelihoods. Our approach requires continual strengthening of the healthcare system through such factors as capacity for widespread testing, increased capacity of local ICUs, and the ability to monitor and quarantine chains of transmission. Technology will play an important role in “licensing” people to return to work, but each country will have to consider privacy issues in introducing such systems. The local-response matrix should be refreshed frequently to guard against a rise in transmission. Resurgence is a real risk and will inevitably occur in many locations.

Countries are naturally anxious to restart their economies. So are citizens. But countries that deliberately shape the next normal, rather than moving to the next stage haphazardly, will have greater success in saving both lives and livelihoods.

The War in Ukraine and the Rush to Feed the World