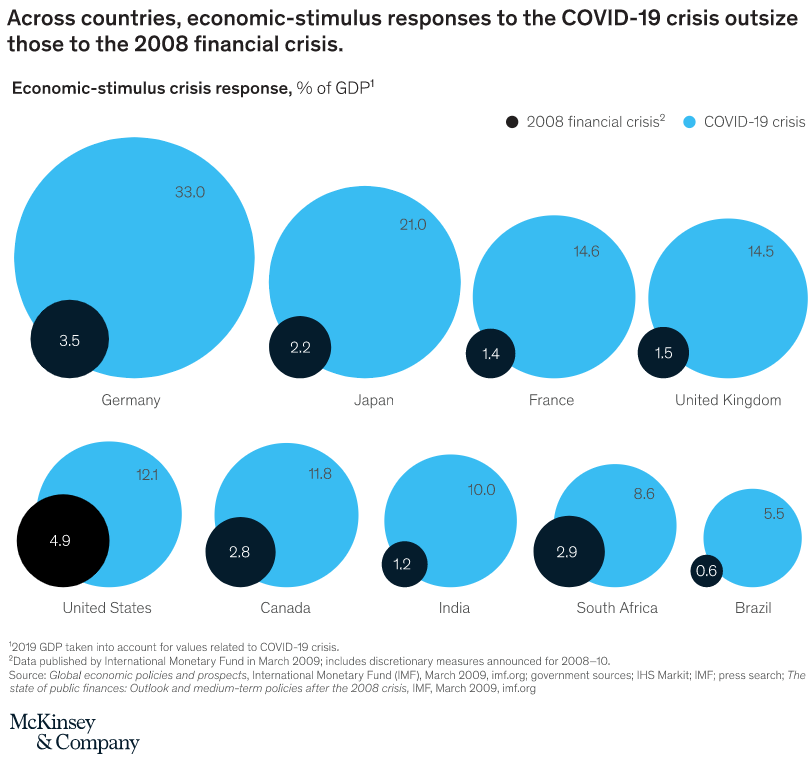 The $10 trillion rescue: How governments can deliver impact

Governments have announced the provision of trillions of dollars in crisis relief, but translating that into sustained recovery will not be easy.

The COVID-19 crisis is one of the worst health emergencies the world has witnessed for a century, and its economic impact could be just as steep. While it took several quarters for unemployment to peak in other crises, the economic shock of the COVID-19 crisis has been larger than that of any previous crisis—and it materialized within weeks. Five weeks into the crisis, the weekly number of jobs lost in the United States continues to exceed any pre-COVID-19 record. In some sectors, demand came practically to a halt in a matter of days as a result of lockdown measures.

Governments’ economic responses to the crisis is unprecedented, too: $10 trillion announced just in the first two months, which is three times more than the response to the 2008–09 financial crisis (Exhibit 1).1 Western European countries alone have allocated close to $4 trillion, an amount almost 30 times larger than today’s value of the Marshall Plan. The magnitude of government responses has put delivery into uncharted territory. Governments have included all shapes and forms in their stimulus packages: guarantees, loans, value transfers to companies and individuals, deferrals, and equity investments—as if advice from all modern schools of economic thought has been applied at the same time.

But is it working?

The crisis is far from over, and recent consumer surveys show that spending is not coming back yet. This article, based on analysis of the economic responses of 54 of the world’s largest economies, representing 93 percent of global GDP, has the following aims:

Our benchmarking of stimulus actions taken by 54 countries shows significant variation in the size of the response, with some countries committing to spend as much as 40 percent of GDP (Exhibit 2). Despite experiencing similar GDP losses and undergoing in-line lockdowns (both in stringency and duration), most emerging-market countries’ stimulus packages have significantly lower spending.

Given the broad global impact of the COVID-19 crisis, few populations, businesses, sectors, or regions have been able to avoid the knock-on economic effects. That means government measures have had to support large parts of the economy in a very short time to maintain financial stability, maintain household economic welfare, and help companies survive the crisis (Exhibit 3). In addition, countries have tended to escalate their interventions as the crisis increases in severity and lockdowns persist. Nine of ten countries in our data set have already announced at least one additional financial-relief or -stimulus package. Two-thirds of countries have announced three or more packages, while a few countries have announced as many as six or seven packages.