We are seeing many changes relating to registration requirements, digital reporting requirements, the approach to audits and compliance by tax authorities and the approaches to taxing the digital economy. It has been said that we are now living in a volatile, uncertain, complex and ambiguous (VUCA) world, and in relation to international indirect taxes, this is certainly the case. We have outlined just a few of the indirect tax trends below, please download our complete guide for more information [ 8899 kb ].

Indirect tax is the new direct tax
While there appears to be a trend for corporate income tax rates being lowered, VAT, GST and sales tax rates are generally increasing. Tax authorities are realising that taxing revenue and actual transactions can raise more revenue than simply focusing in on profit, which can often be subjective and subject to manipulation. Put simply, it’s easier to tax the transactions that create the outcomes, rather than the outcomes themselves.

Many of the emerging markets are introducing new indirect tax systems. Over the last 12 months we have seen India carry out landmark economic reform by introducing GST, replacing several different taxes at a state or national level. We have also seen the first two Gulf Cooperation Council (GCC) states introduce VAT – namely the United Arab Emirates and Saudi Arabia. It’s also expected that the other GCC states will follow shortly in 2019. In Malaysia, the country is repealing GST and reverting to a sales and services tax. China also continued its tax reform and has recently completed the final transition from Business Tax on services to VAT.

Taxing the digital economy
It’s been 15 years since the European Union (EU) introduced specific targeted legislation to tax the digital economy. It did this by forcing non-EU businesses providing digital services to private consumers in the EU member states to register for VAT and charge VAT based on the customer location.

This legislation was originally controversial, and businesses were slow to comply. This is now a genuine trend and the legislation has inspired similar laws across the globe. It seems that almost every month another country announces new legislation targeting non-resident supplies of digital services.

This is particularly a growing trend in the APAC region, including Australia who introduced the ‘Netflix’ tax, as well as, New Zealand, South Korea, and Taiwan. Singapore is also one of several countries announcing similar future plans. There are lots of challenges for businesses to consider, including identifying and evidencing customer location, calculating and charging the right rate of tax, meeting local invoicing requirements, as well as making payments in foreign currencies.

Expanding definition of ‘nexus’ – Wayfair
It is not just digital services that are increasingly being taxed in the emerging digital economy, but also supplies of goods from suppliers outside of the country or state by online webstores and online marketplaces. The recent ‘Wayfair’ decision in the US could be the most significant indirect tax court decision in a generation.

Changes to customs processes – Brexit
The ‘Brexit’ decision of the British public to leave the EU has large possible ramifications across indirect taxes. It has also shone a light on supply chains, and customs duty, often seen as the ‘Cinderella’ tax, has gained more headlines in the media. Businesses in the UK and Europe are now modelling the potential impact of different trading relationship models on cash and cash-flow.

In addition to Brexit, importers and exporters should also be aware that the UK is replacing its Customs Handling of Import and Export Freight (CHIEF) customs declaration system and will launch a new ‘Customs Declaration Service’ system in 2019 – another change for businesses to add to their roadmap to be prepared for. While there is uncertainty, many businesses are carrying out ‘no regrets’ actions, for example looking to obtain ‘trusted trader’ position by obtaining Authorised Economic Operator (AEO) status.

Digitalisation of VAT compliance
The direction of travel for international indirect tax compliance is very clear, it’s digital and near real-time. Historically, tax authorities accepted paper invoicing and adopted a ‘post-audit’ approach, where the taxpayer charged tax on an invoice and this would only be audited after the fact.

Often by a tax inspector or auditor physically looking at invoices and records. This would often be based on sampling – a riskbased approach to compliance. Taxpayers themselves may have only needed to physically submit a periodic summary VAT/GST return, often paper. However, the trends seen across the globe include a shift to mandatory electronic invoicing. An example of this is Italy which will introduce mandatory business-to-business electronic invoicing from January 2019.

As well as the customer receiving an electronic invoice, many tax authorities also receive it as well as receiving tax, master and transactional data in real time.

How can you keep up to speed?
How should businesses and their indirect tax functions respond to the changes and uncertainty in relation to international indirect taxes? Working with our network of member firms we have compiled this global guide of indirect tax tax systems in key countries and how you can get further support. 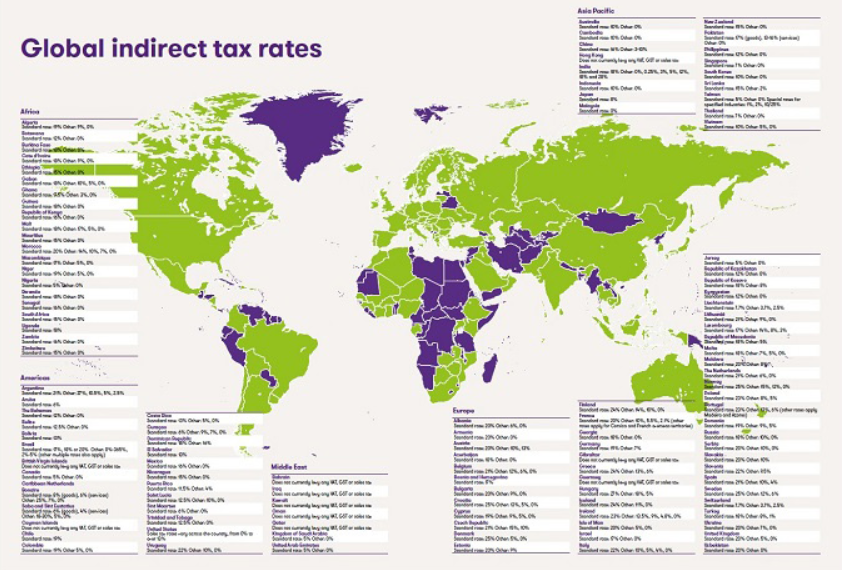 What to watch out for when combining public support (subsidies or investment incentives) and R&D tax-deductible items?

Tax waiver in relation to a professional education allowance

VAT exemption when testing for COVID-19