Industrial production affected by calendar bias Industrial production grew by 4.8% YoY in November. One extra working day played a role and adjusting for that, Czech industry would have grown by 1.5% YoY, down from the 3% rate in October, which was also the average growth rate in 2018. The November figure was thus in line with analysts' consensus.

The manufacturing industry itself rose by 5.7% in November (2.0% after adjusting for the calendar bias), mainly due to strong growth in car production, which accelerated by 10% YoY, the fastest pace since April 2018. Since October, the automotive sector and the production of other transport equipment have improved after several weak months, but new orders are still not providing more optimistic prospects for this most important Czech industry.

Total new orders improved by more than 5% in November. Though weaker compared with October, that's still slightly stronger than the average growth rate for the whole of 2018. Still, in the case of the automotive segment, new orders fell in YoY terms, mainly on the back of new foreign orders (-1.8% YoY). 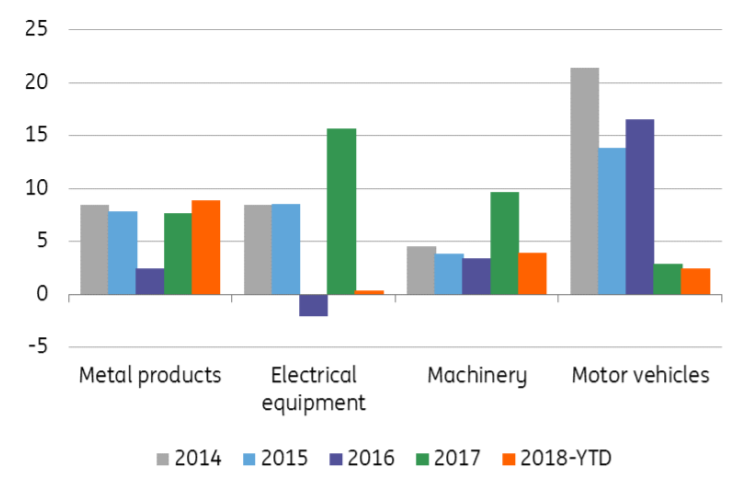 Foreign demand on the weaker side, as Germany industry indicates Aside from new orders in the car segment, today's figures from domestic industry seem solid. However, foreign demand is one of the main risks to the future. German industrial growth in November fell by almost 2% month-on-month, the biggest drop since the summer of 2015. While part of the story will be related to the impact of new emission standards in the automotive industry, it is becoming more evident that the problem is also related to the weaker global economy.

What are the price trends in rental housing in the Czech Republic? Deloitte Rent Index August 2022

AmCham President M.Šlapák: At AmCham, we are going to be focused on working together to solve the challenges we all face

AmCham Real Estate Council: For us to become an innovative economy, the way we plan to use our land must also be innovative