Parents do not want mobile phones at schools

The results of a survey conducted for T-Mobile by the agency IPSOS among 525 parents of children aged 6-18 from across the entire Czech Republic show that two-thirds of Czech parents are in favour of a general prohibition on the use of mobile phones throughout the entire time that students spend at school, following the example of France and other European countries. They believe that mobile phones distract children from learning and that they can be misused during tests, particularly by older pupils. Many parents are also worried about the fact that children brag about who has a better mobile phone, which may lead to bullying and exacerbation of social differences. A general prohibition was, for example, introduced by France from this September. French MPs have approved a ban on the use of mobile phones, tablets and smart watches at school during the whole school day. Use of mobile phones is being restricted in Scandinavia; the United Kingdom also wants to ban mobile phones at the second level of primary schools.

Conversely, younger parents in the Czech Republic have a more benevolent approach to the use of mobile phones. They argue that mobile phones and tablets are an ordinary part of today’s world, children use them naturally and that school should prepare them for life also in this respect. Bohumil Kartous, an education expert from the EDUin education information centre, agrees: “A ban or restriction on the use of smartphones in class is a reflection of adults’ helplessness with respect to how digital technologies should be meaningfully integrated into education and teaching. That is rather sweeping the problem under the rug. Modern technologies significantly affect the lives of people and society and schools should endeavour to find a solution on how they should be appropriately incorporated into the classroom environment.”

Younger teachers regularly use the internet in the classroom

Mobile phones as part of modern education? Yes, with moderation.

“Current students and pupils have been using mobile phones and tablets since an early age. Czech schools should try to take advantage of that and not fight against it. For example, there are a number of interesting applications available thanks to which students can learn information on physics, chemistry and history much more effectively than by rote memorisation from textbooks,” says Martina Kemrová, Senior Head of Corporate Communication at T-Mobile, commenting on the results of the survey and adding: “If we accepted the idea that it is not so essential to have lists of dates, names or definitions in our heads but that it is sufficient to know where to find them, students could focus on a much more important activity – finding correlations. Nevertheless, it is a matter of course that schools can and should regulate the use of mobile devices for the benefit of education.” 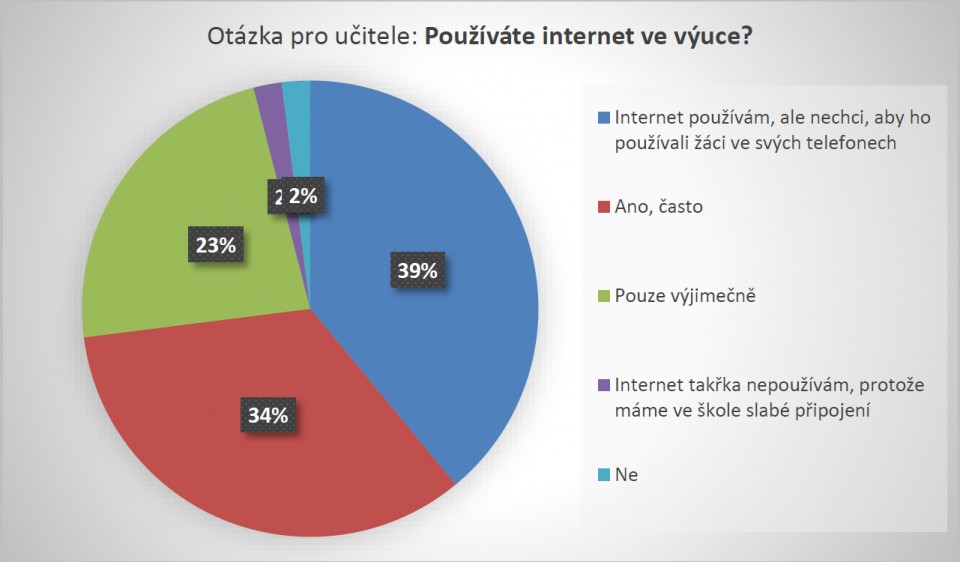 Question to teachers: Do you use the internet in the classroom?

Yes, I use the internet but I don’t want my students to use it on their phones

Question to parents: Would you approve of a general ban on mobile phones at schools?