Ageing is not just a story about declining economic potential,  ING Bank says in their most recent report. The other side of the coin shows rising demand for products and services that are tailored to the needs of the elderly. In this report, we try and find out where demand for elderly care and housing is most promising and we attempt to do this by comparing eleven European countries.

The Netherlands takes first place two times in the overall rankings: on the wealth of the elderly as well as on housing potential. The Netherlands' lowest result is on demographic potential, at sixth place. The Spanish are the runner-up. In addition to their first place on demography, Spain has a high potential demand for home support and elderly housing. With wealthy seniors who highly value care, home support and elderly housing, Belgium comes at third place. Austria, France and Germany are tied fifth in overall rankings, the report says. 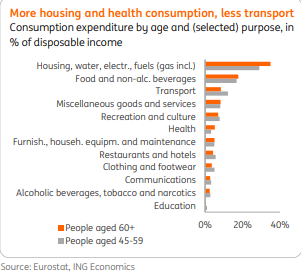 Closing the gender gap in the Czech Republic