As economic growth accelerated significantly in 2017, the Czech Republic is in a good position to address remaining structural challenges, the European Commission says.

The Czech Republic’s investment outlook is buoyant. Foreign direct investment (FDI) is highly productive, supporting over a quarter of all private sector jobs and more than three quarters of all exports. On the other hand, investment in infrastructure continues to remain below the EU average. Investment is expected to increase strongly as companies — especially in manufacturing industries — ramp up investment in machinery.

Labour market indicators set new records but at the same time signal limits to future growth. With an increasing level of employment approaching 80 % and an unemployment rate of 2.5 % in the fourth quarter of 2017, the country is facing a tightened labour market and increased labour shortages.

The Czech Republic has made limited progress in addressing the long-term sustainability of public finances. Some progress has been made in improving the anti-corruption and public procurement frameworks and in streamlining procedures for granting building permits. The range of e-government services has expanded and the quality of R&D has slightly improved. Some progress has also been observed in fostering employment of under-represented groups. 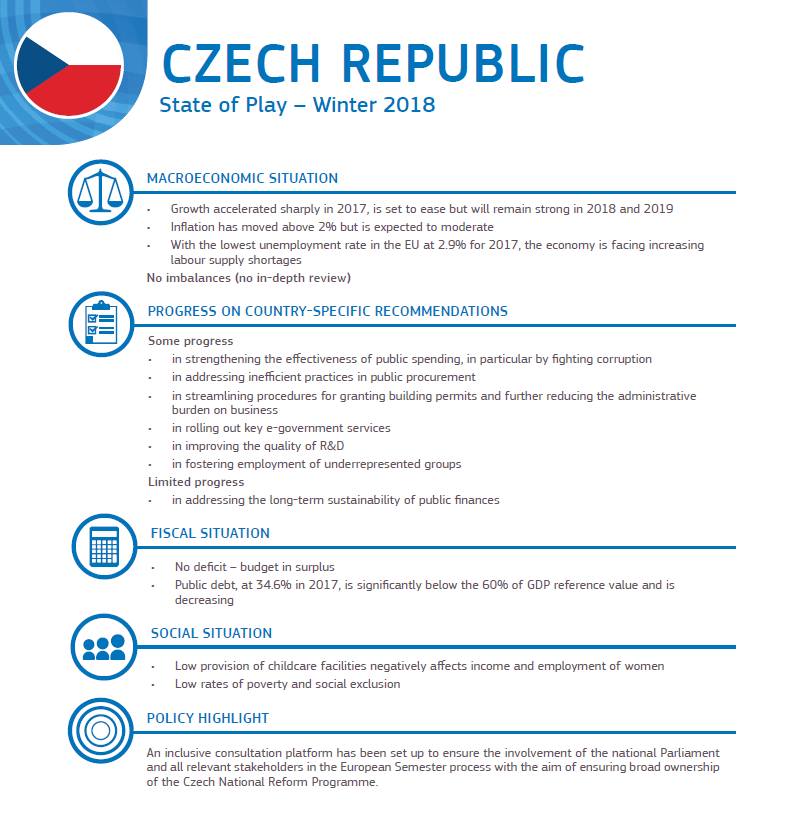 Key structural issues analysed in this report, which point to particular challenges for the Czech Republic’s economy, are the following:

View also how the Czech Republic stands in the EU social scoreboard. The Czech Republic lags behind in employment of women and in the area of formal childcare for children aged less than 3 years.

How are EU countries performing when it comes to equal opportunities & access to the labour market, chapter 1 of the European Pillar of #SocialRights?

Read also ILO: Women still less likely to be active in the labour market than men in most of the world