A mixed economic picture in the Czech Republic

Czech industrial production weakened in February, declining by 2% month-on-month, and by 2.6% year-on-year. The January decline was revised lower from -4.4 to -5% YoY, but January was impacted by a lower number of working days, so after that adjustment things were slightly more positive at 0.3% YoY (revised from 0.9% WDA YoY). The main reason behind the weaker figures was lower car production, which fell by -8% YoY in February (-9% YoY in January), as supply chain disruptions and missing chipsets are causing shutdowns. Still, new orders improved and increased by 7% YoY, mainly from abroad. All in all, weaker production comes on the back of supply-side problems which will very likely remain an issue in the months ahead.

February retail sales (without cars) increased by 2.8% MoM; in YoY terms, it fell by 5.8%, but adjusting for the leap year 2020, they yearly fall reaches only 3%  (food sales stagnating, non-food items sales falling by 4.6%). Internet sales accelerated by more than 40%, while sales in traditional shops fell by double digits (eg. footwear and clothes by 70%). Still, last February we saw a build-up of food stocks due to the arrival of Covid-19, therefore February had a relatively high base and given restrictions this year, the February retail numbers are relatively positive (the market expected YoY fall by 7.8%). Car sales fell by 3% YoY, which is also better than expected as new registration fell by 15% YoY in February. 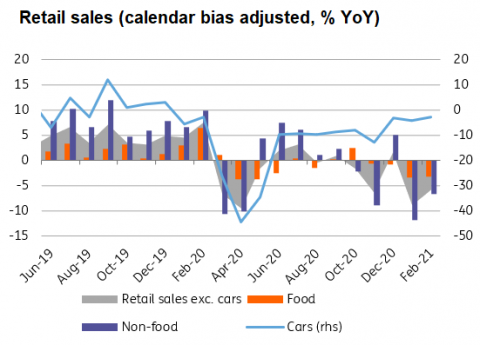 The share of unemployed people declined from 4.3% to 4.24% in March, which is the result of typical seasonality as some jobs restarted after the winter. In past years, however, seasonality was usually 0.2-0.3 percentage points between February and March, so we see only a negligible improvement this March given the Covid crisis. But unemployment remains below 2017 levels so that's still relatively low amid government supportive measures. 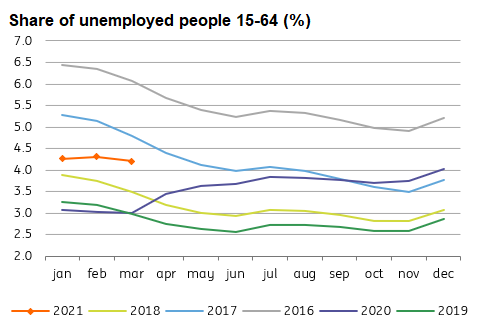