Another blow for Czech industry as the automotive sector slumps

Czech industrial production disappointed in August and the YoY decline fell by 8% (-5.5% if adjusted for working day bias); the market expected -4.3%  YoY fall. The YoY fall intensified in August broadly, but particularly in the all-important automotive sector, which fell by almost 12% YoY (-8% adjusting for one working day difference), while YoY dynamics were just slightly negative in July (-0.7% YoY).

New orders in industry were also not favourable, as their year-on-year decline intensified from -3.6% in July to almost 10%, which was mainly driven by a decline in foreign orders (-11.1 YoY). Even here, however, the effect of fluctuating summer months plays its part and the numbers must be taken with a degree of caution. 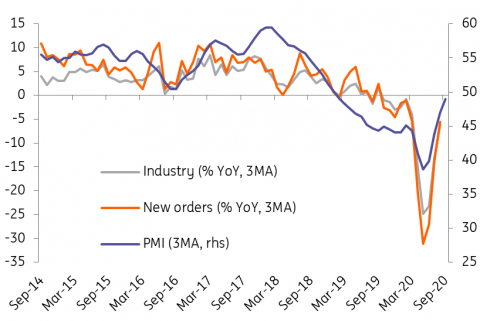 As such, the August industry numbers disappointed (as in Germany) and did not follow the favourable July developments. But this could be due to the different YoY distribution of company holidays, which caused better than expected July figures and on the contrary, worse August figures. On average, industrial production was 6.5% YoY weaker during the summer months and -5.3% YoY if you take in the working day bias, which is relatively solid when you consider the double-digit fall in the spring.

Although September's industry-leading indicators were rather positive, both in Czech industry as well as in Germany, the advent of the second wave of the epidemic will hamper further industrial recovery. From January to August, Czech industry fell by 12.2% year-on-year, but the overall decline should gradually fall below 10% by the end of the year, despite the second wave of the Covid-19 outbreak.