The Next Generation EU fund was approved on Monday with a total EUR 750 bn budget allocated to fight the negative economic consequences of Covid-19 outbreak.

Although the total part allocated for grants was reduced from the initially planned EUR 500bn, individual CEE countries will receive from this extraordinary source between 4% to 8% of its 2018 GDP. Apart from that, loans might be tapped with allocation between 6% to 8% GDP, with conditions more likely favourable than would be the case if available on the national level. Taking the grants and loans together, the support from the New Generation budget in a 3-year horizon ranges from 11 to 16% of GDP for the CEE region including Slovakia.

The total amount of grants for the CEE region (including Slovakia) equals more than 72 EUR bn, which represents 18.5% of total EU grant allocation of EUR 390 bn. As the CEE GDP represents just 8.4% of EU27 GDP in 2018, this means that the CEE region will be the net beneficiary of the grant distributions among EU countries. The current proposal expects that 70% of funds will be distributed in 2021-2022, with the remaining 30% later based on real GDP decline during the 2020-21 period. Funds should be repaid by 2058.

Regarding the EU budget in the new multiannual financial framework 2021-2027, it should apply the general assumption that CEE countries will receive fewer funds mainly from the cohesion funds due to its convergence. As some CEE countries cross the 75% of GDP per capita of the EU average threshold, this makes them less eligible for EU funds (see Directional Economics from November 2018). Although the final numbers on EU budget are not officially published yet, based on our initial estimates and media reports, the overall transfers to the CEE in the 2021-2027 budget period will be eventually larger (vs the current budget) when accounting for new grants (and of course even larger when accounting for loans).

Czech economy should receive 8.7 EUR bn in form of grants (2.2% of total EU grant allocation) and EUR 15.4 bn loans (4.3% of total EU loans allocation) from the new the Next Generation EU recovery fund. This represents more than 4% of Czech GDP in terms of grants and more than 7% of GDP for loans, totalling more than 11% of GDP.

The Czech Republic negotiated a possibility to shift around 25% of allocation across structural funds according to its particular needs. This compares to the 20% threshold for other countries. The Cohesion fund was increased by 1.55 EUR bn vs. the previous estimate, although almost EUR 2 bn funds were lost from the Just Transition funds compared to earlier assumptions. However, total income from the Recovery fund was slightly higher than expected despite lowering the total amount of EU-grant allocation as unemployment criterion (unfavourable for CZ) changed for GDP for 2023.

The previously rumoured figures have not been updated yet, but Hungary should receive 8 EUR bn in form of grants (2% of total EU grant allocation and EUR 7 bn loans (2% of total EU loans allocation) from the new the Next Generation EU recovery fund. This represents around 6% of Hungarian GDP in terms of grants and 5.2% of GDP for loans, totalling more than 11% of GDP. Not much change expected when it comes to the final figures, so still, a nice amount to have.

The outcome regarding the new EU budget 2021-2027, however, is a really positive one. The previous MFF budget for Hungary was EUR 32 bn but based on the recent rumours, it will be around EUR 35bn for the upcoming seven-year period. The caveat here is that these numbers include the co-financing from the Hungarian state.

Poland should get around 29.5 EUR bn in form of grants (7.6% of total EU grant allocation) and 30.6 EUR bn loans (8.5% of total EU loans allocation) from the new EU Recovery fund and Just Transition Fund. Poland is to be the biggest beneficiary and will receive 3.5 EUR bn from the latter fund aimed at supporting the low-carbon transition in coal-dependent regions. Grants represent 5.9% of GDP and loans 6.1% of GDP, totalling 12.1% of GDP.

We have some doubts in effective absorption capacity of new grants in Poland starting as early as 2021 given the complex bureaucratic procedure imposed at the EU level, and lengthy preparations of new investments locally. The summit conclusion says that 70% of new grants should be used in 2021-22, and the remaining 30% in 2023. We see this distribution over time in Poland rather 20%-50%-30% in 2021-23. This would translate in additional transfers of EU funds to Poland of about 1.1%-2.8%-1.7% of GDP in 2021-23, respectively. Nonetheless, the Minister for EU Funds and Regional policy has already announced a first draft of the National Recovery plan to be ready in late summer.

From the “traditional” EU budget (cohesion funds and payments from the Common Agricultural Policy), Poland should get around 95 EUR bn in 2021-27, which is an equivalent of 19.2% of GDP (2.7% of GDP per year if distributed equally over the 7 years).

Thanks to the new grants from the Recovery fund, in the new EU’s financial perspective, Poland will benefit from an increase in the EU subsidies by 7% compared to the budget envelope in the current EU budget. The country will remain the biggest beneficiary from the cohesion funds. Without the new grants, the country would suffer around 18% decline as the total EU budget was supposed to shrink due to Brexit and other factors. Thanks to the EU deal, Poland gets a strong and timely instrument to support the economic recovery starting 2021 as the measures from the generous domestic anti-crisis shield are to expire.

Romania is to receive EUR 33.5bn from the Next Generation fund, split into EUR 16.8bn grants and EUR 16.7bn loans. Their own contribution is EUR 12bn so on net we're looking at EUR21.5bn or around 9.5% of GDP over the next four years

From 2021-2027 EU budget (the “traditional” EU funds) is to obtain EUR 46.3bn, which in line with expectations. We would expect a low absorption rate in the initial years as most efforts/projects will be channelled on getting the grants from the Next Generation fund.

CEE currencies have benefited from the EU summit outcome and turned into the top EM performers yesterday, benefiting from (a) the sizeable EU recovery fund grants, loans and the EU budget distributions; (b) reduced downside risk to EZ growth (its main export market) and further compression in the EUR risk premium; and (c) the accompanying rise of EUR/USD (with CEE FX being the only EM region directly benefiting from higher EUR/USD).

While we think it is premature to reach a conclusion about the impact of the EU budget and EU recovery fund on CEE currencies BEER fair values if the latest EU measures mean faster and a more synchronised EU recovery, this will be a positive for currencies of export-oriented CEE countries.

Among the individual CEE crosses, CZK remains our top pick for the remainder of the year (we see EUR/CZK at 26.00) given its solid fiscal position and our view that the CNB won’t fight the currency appreciation (given no deflation risk and still well above target CPI).

In the relative value space, we like short PLN/HUF (targeting 78.0) largely due to the more dovish NBP stance. EUR/RON should remain tightly managed from the NBR, with the cross expected to modestly rise later this year, yet not enough the outperform FX forwards. Given our year-end 1.20 EUR/USD target, more gains in CEE FX vs USD are expected. 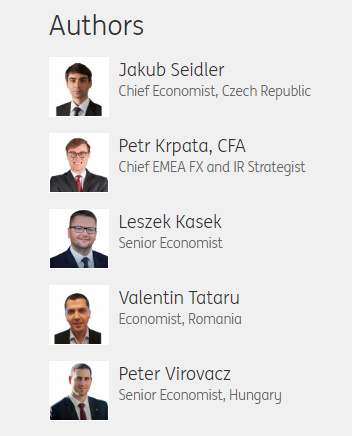