Home > Economic policy > Macroeconomic Indicators, Economic Growth > Central and Eastern Europe: The worst seems to be behind us

CEE economies: The worst seems to be behind

With the central and eastern Europe region being one of the first movers in Europe to start easing lockdown measures, the economic data should continue improving, with 2H20 growth posting a rebound. But despite the recent rally in markets, we continue to look for a U-shaped rather than V-shaped recovery, as was evident in the rather limited rebound in May CEE PMIs (Figure 1).

As is the case for wider Europe, the CEE recovery will be gradual and will take time to make up for the Covid-19 related output loss. 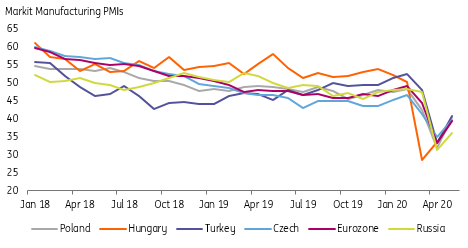 More easing on the way

Although the CEE economics should be on the gradual road to the recovery, the expected increase in unemployment (governments’ supportive measures will continue to be rolled back as the economies get out of the worst) and the further decline in inflation across the region towards or in some case below the target both suggest that any meaningful reversal of the recent monetary easing measures seems unlikely. The bias of local central banks is still skewed towards more easing.

While the CEE region does not necessarily stand out trend-wise (vs other emerging market regions or wider Europe) on the growth and inflation fronts, it offers interesting intra-regional stories.

Perhaps most importantly and reflecting the price action in the CEE rates market, Poland's central bank seems to be challenging National Bank of Hungary's position of the most dovishly perceived central bank in the region. The very large quantitative easing and aggressive rate cuts by Poland (all in the context of a large domestic fiscal stimulus) translated into a meaningful steepening of the PLN IRS curve. 5s10s PLN IRS - the part of the curve that is the bell-weather measure of the perceived behind the curve dynamics, have been steepening meaningfully so far this month.

In contrast, the very cautious NBH stance (FX stabilising hikes, limited QE with the NBH cancelling the QE auctions for the second week running) improved the outlook of Hungarian assets vs Poland (both FX and rates).

Steeper CEE curve looks to us to be the direction ahead as the local long-end rates will continue being dragged higher by rising core yields (mainly UST yields) while the front-end will remain anchored by either unchanged or lower policy rates (with rate cuts in Czech and Hungary in large part priced in).

But given these dynamics, the PLN IRS curve appears the most prone to steepening within the region. 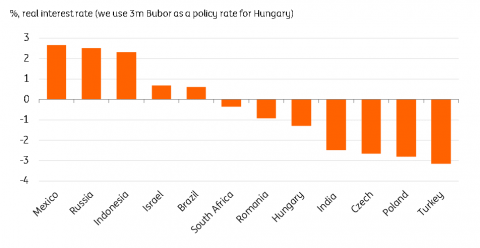 Hence, and despite the nature of rally which would normally favour higher beta high yielders, the low beta low yielding CEE currencies did fairly well and in many instances competed with EM high yielders in terms of spot gains.

We now think the bulk of the CEE FX rally is behind us and further gains should be more modest. Not only some of CEE currencies still look expensive vs EUR on short term basis (though less so than last week), but given the scale of the spot gains and the limited carry potential and the fairly negative real rate (Figure 2), if risk sentiment remains benign, EM FX high yielders should do better.

Here RUB ticks the box - the respectable carry, one of the highest real rates in the EM space and supported oil prices make the currency well positioned in the EM FX space.

Among low yielding CEE FX, CZK remains our top pick. The relative strong fiscal position, inflation minded central bank and, in our view fairly, low odds of FX interventions to lean against possible currency strength (as CPI is to remain close to the target and deflation risks are not present) all make the koruna attractive.

This article is part of ING Bank's

June Economic Update: Hope returns despite the huge challenge ahead