Confidence among households is now only slightly above the lowest level seen in April or October last year. In comparison to December, households are more concerned about the deteriorating economic situation and rising unemployment. The intention to save has decreased too, as fears around rising prices have increased again despite slowing inflation.

Retail-trade has been hit the hardest

Business confidence fell too in January in all monitored segments (industry, services, constructions, retail trade), but most significantly in retail, where economic restrictions have been significant. However, even in retail, confidence is still higher than it was during the first wave of the pandemic.

Entrepreneurs expect a significant improvement in retail trade and services in the next three months. Confidence also declined slightly in construction in December.

In industry, however, the decline was modest and is now close to pre-pandemic levels in recent months. From this perspective, industry is keeping business sector confidence at a relatively solid level, although in all other segments confidence is below its one-year average.

Confidence in the Czech economy 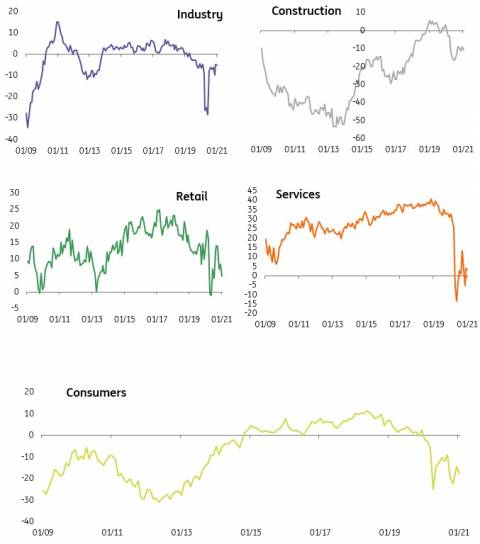 Confidence has been fluctuating in recent months in line with the development of anti-covid restrictive measures in the economy.

February is likely to continue to be impacted by restrictions, given that the state of emergency has been extended until 14 February and restrictions are unlikely to ease in the first half of the month. However, recovery is expected from March onwards and we expect a faster pace of recovery from the second quarter onwards.