Household confidence in the Czech Republic fell sharply in February and this trend continued in March.

Czech household confidence seems to be at similar levels seen last November and only slightly above the rock-bottom levels of April 2020. Compared to the previous month, households are more concerned about the deterioration of the economic situation. Their concerns about higher unemployment are on the rise and - in fact close to historical highs.

Business confidence fell in March in all segments except construction, but most significantly in services.

In industry, confidence has declined slightly but is still higher than the beginning of the year and close to pre-pandemic levels. Compared to the first wave, industry has kept operating, though there were serious debates about full lockdown (except critical firms) in March.

However, this isn't happening as firms have been instead instructed to test virus symptoms regularly in their employees. 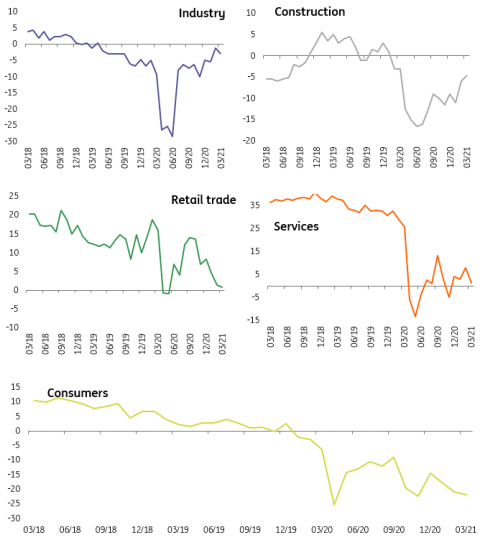 Given the renewed lockdown since the beginning of March, the deteriorating confidence indicators isn't surprising, but it shouldn't impact the Czech central bank meeting today.

The Bank is expected to only reiterate the timing for potential monetary tightening, which is likely to shift to the second half of the year. However, it might celebrate a little bit too today, as the law passed by the Chamber of Deputies is forwarded to the Senate. The central bank has been pushing for this amendment since 2016, as this change should provide the Bank full ability to perform quantitative easing if required.

The current law allows it only to do so until the end of 2021, so the amendment will enhance the Bank's powers for macroprudential measures as it will be able to set legally binding credit ratio limits for mortgage applicants.

Until now, the central bank set those limits as recommendations only, but the banking sector as a whole complied anyway.