Consumer confidence decreased slightly in June but that followed a record high in May, so some correction was not surprising. At the same time, the decrease in confidence was only cosmetic and the value of the indicator remains at its second-highest in history. Even the increased global uncertainty and concern about trade wars are having little impact on the mood of domestic households. Consumer concern about a worsening of the overall economic situation did not change compared to the previous month, and neither did concern about their own financial situation. Concerns about rising unemployment increased slightly, which is the reason for a slight decrease in the indicator in June. Household intentions to save have not changed compared with May, and remain at a historic high.

Business confidence increased in June in all monitored segments, except for trade, but the decrease was only negligible. Total business confidence is close to its highest level in 10 years. An increase in confidence in industry was due to higher production expectations in three months' time. 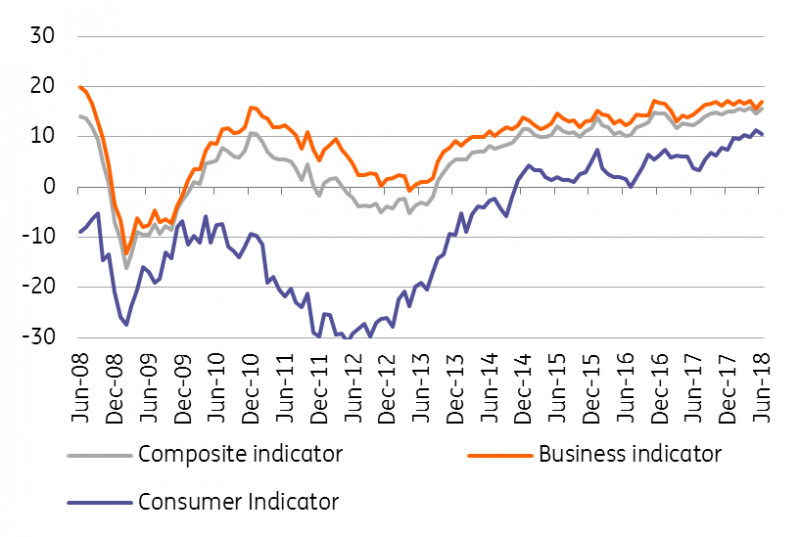 No reason to wait for the CNB. Hike expected on Wednesday

Both business and consumer confidence remain high. In particular, domestic households are still optimistic, which is due to a steadily declining rate of unemployment and rising wages. This further confirms that household consumption will be one of the main factors behind the growth of the domestic economy this year.

From the CNB's point of view, today's data doesn't raise any concern that a June hike could be premature. On the contrary, the data confirms continuing strong consumer sentiment, which should create inflationary pressures. Due to a weak koruna compared to the latest CNB forecast (1.5% for the 2Q18 average) and pro-inflationary risks stemming from the overheated labour market and soaring wages, we believe the CNB will no longer postpone an increase in rates and will deliver a hike during its Wednesday monetary meeting.