Household confidence was relatively weak in previous months and only slightly better than in April 2020 when it hit a low at the height of the Covid crisis. However, households have become more optimistic due to the improving pandemic situation, and confidence has reached levels seen during the summer, when worries about Covid were more muted.

Confidence among entrepreneurs also recorded significant month-on-month growth in April, in all watched segments except construction. Although most companies slightly improved their assessment of the current situation, the significant increase in confidence was driven mainly by better prospects over the next three months. This is related to expectations for a loosening of restrictions. Confidence in retail trade is thus the highest since October last year. In services, it is the highest since September last year, and in industry, it's the highest in the last three years. However, a large number of companies in industry complain that, in addition to insufficient demand, a lack of materials is a major barrier to growth. This is related to supply chain disruptions and missing semiconductors, which have forced domestic producers to reduce production in recent months.

Confidence in the Czech economy 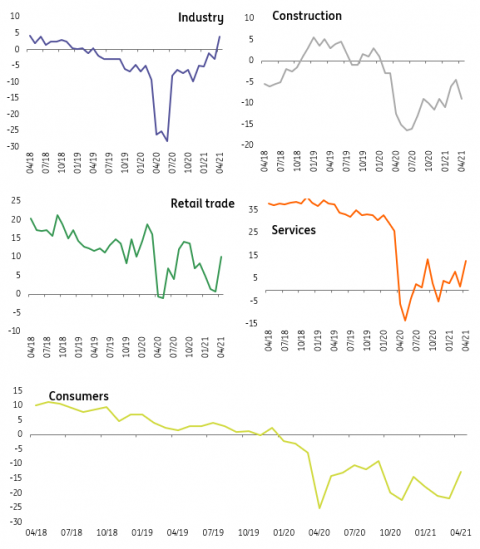 Confidence in the economy has been fluctuating in recent months in line with developments in the pandemic and subsequent restrictive measures. Given the gradual vaccination of the population, the improvement of the pandemic situation and expectations for a gradual loosening of restrictive measures (shops reopening planned on 3 May), the improvement in April confidence is understandable. In this respect, today's numbers from the domestic economy have a positive effect, but the growth in confidence is driven mainly by expectations, which may not be met in the coming months to the extent that companies and households now hope.