As the number of new orders from bigger construction companies reached 63,300 - the highest since 1999 when the statistics started being tracked- we believe that growth in construction production should continue further this year. Still, with capacity constrained by the availability of workers and construction materials and slower EU-funds investments, some slowdown towards 5% is likely.

The total number of newly started dwellings, which are permitted but not necessarily completed in that period, reached 27,600 in 2018 (3.6% YoY growth). This is the highest number since 2009. Also, the number of started dwellings in multi-dwelling buildings has improved slightly in 2018 (0.5% YoY) and reached 7,300. Though this is again the highest number since 2009, it still remains almost 50% below the 2008 pre-crisis-level.

Total number of dwellings is improving, but not fast enough

Though both total number of completed dwellings/multi-dwelling buildings were the highest in the last 10 years, the situation is improving only slowly. Indeed, the level of completed flats is still around 4,000, i.e. 13.3% less than in Prague in 2017. However, the Prague Institute of Planning and Development estimates natural demand around 5.5 – 6,000 flats per year due to the general migration of the population towards the capital city. This means that the real supply of flats is still significantly lagging natural demand, causing overheating on the Prague property market in recent years.

While the number of granted permits in housing construction has slightly improved, the construction and development of new housing is still suffering due to the long-lasting approval process of a new building, which might take five years on average due to the high number of authorities involved in the approval process. With a change in the legislation process only expected to come into force in 2021, the supply of new flats will likely remain below natural demand in the years ahead, limiting the decline in property prices somewhat after double digit growth in recent years, mainly in larger Czech cities. 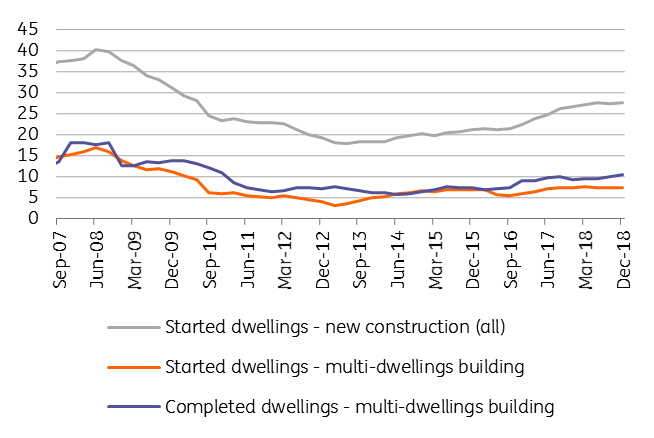