After a disappointing August, September's industrial production beat the market consensus, growing by 4% compared to the previous month. In year-on-year terms, it fell 1.5% after an average fall of around 5% during the summer months.

The strong performance of the automotive segment helped, adding 5% YoY, which was the first YoY growth since February 2020. Year-to-date, however, auto output remains 19%  lower YoY.

New orders also improved significantly in September, growing by 5% in total, with foreign orders up by more than 7%. New orders in the automotive sector soared by 13.6% YoY, despite remaining 16% lower YoY for the whole of 2020. 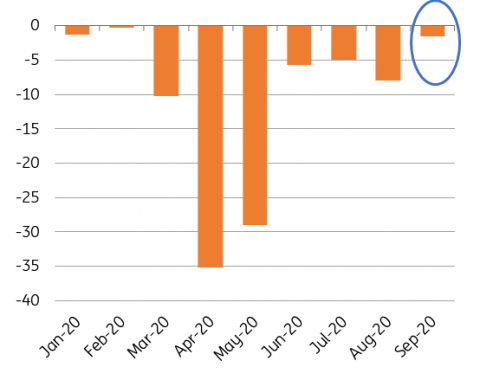 Risks ahead, though industry keeps going compared to spring wave

For the whole year, industry is down by 10.9% YoY, a figure which should fall to less than 10% by the end of the year. However, the recovery will be hindered by the second coronavirus wave. Importantly, Czech car makers are still open for business (compared to spring, when they voluntarily shut down), but the second wave in Europe is likely to slow foreign demand, which will impact Czech industrial companies sooner or later.

That said, October should remain solid. The PMI survey showed that new orders grew solidly, though mainly as a result of pre-stocking related to the pandemic, which might not be sustainable in the future. All in all, this was a solid figure today, though many important industrial segments continued to contract from a year ago and the main pro-growth contribution came from the automotive sector.