In year-on-year terms, the fall in industrial production in the Czech Republic was less intense in almost all important industrial segments in July, especially car production.

From this point of view, car production has reached almost the same level as was seen last year in July, nevertheless, it still remains 24% YoY lower for the whole year. At the same time, it is necessary to take into account that the summer months are often affected by company-wide holidays, and are thus less reliable as YoY dynamics are volatile.

Some improvement was also evident in wages. While wages of employees in larger industrial enterprises fell by 6% YoY in May, they returned to modest growth (+ 0.7%) in June and further accelerated by 1.7% YoY in July. On the other hand, a fall in employment accelerated to -4% YoY. 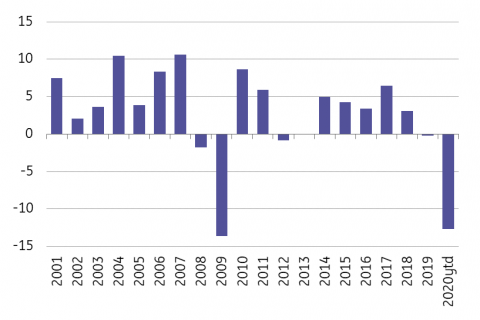 As expected, the domestic industry reached its bottom in the second quarter (-18.7% QoQ) and has been slowly recovering since May. But as leading indicators have already signalled, recovery is relatively slow due to the continued disruption of global demand due to the pandemic. However, the development in new orders continues to signal gradual improvement.

While total new orders remained around 3.5% YoY lower as of June, year-on-year growth accelerated from 3.5% to 9.5% in the automotive segment and both for domestic and foreign contracts.

These figures show that foreign demand is gradually recovering, as confirmed also by new orders in Germany in July, which rose slightly by 3% after strong month-on-month growth in June (but remain 7% weaker YoY).

This year's fall is likely to be weaker than expected

July industrial numbers surprised slightly on the upside, although the numbers from summer months are less reliable due to company holidays.

Still, recent months have performed above expectations which means that a decline in the domestic industry could be modest and so far we expect a year-on-year decline of about 7%, while consensus expectations see a fall by 12% this year compared to the13.6% decline during the global financial crisis in 2009.