The main reason behind CPI acceleration in June was the prices of alcoholic beverages and tobacco, where higher excise duties from the beginning of the year phased in.

Prices of tobacco products thus accelerated from 7% year on year in May to 12%. The category "alcoholic beverages and tobacco" thus explains most of the June YoY acceleration in price growth (see the table).

Fuel prices also accelerated slightly in June (by 3% MoM), but from a year-on-year point of view, their prices are still broadly 20% lower. As in the previous month, car prices accelerated further, so the "transport" category also made a slight contribution to YoY acceleration in June. On the contrary, for the first time since September last year, food prices fell month on month, and their contribution to inflation growth thus eased.

Prices of services are not decelerating

Surprisingly, the pandemic hasn't resulted in a faster decline in service prices yet which may also be a result of measuring inflation in current times.

Structure of the inflation in the Czech economy 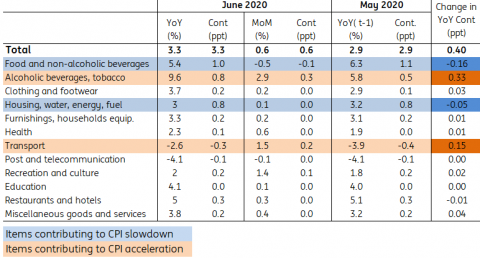 2020 inflation higher than expected a few months ago

Despite faster price growth in the first half of the year, we still expect inflation to slow close to 2.5% in the second half of the year. For the whole year, however, inflation will probably stay higher than we expected some time earlier, around 2.8%, same as the last year. Nevertheless, how significantly coronavirus crisis will affect inflation in the coming quarters remains relatively uncertain.

The average inflation in the second quarter of this year thus reached 3.1% and was above the CNB's estimate from the last forecast in May of 2.9%. Domestic inflation thus remains elevated and has exceeded the upper limit of the central bank's tolerance band. The risk of deflation, which central bankers are afraid of in a number of countries, seems to be still relatively far away in the Czech economy.

This reduces the chances that the CNB will start any unconventional monetary steps as interest rates are close to zero-lower bound. As such, the most likely scenario seems to be stability of rates in for a longer period of time and wait-and-see approach from the CNB side.