Czech inflation increased from 2.1% in February to 2.3% in March, mainly on the back of higher fuel prices, which increased by 6% compared to February.

In comparison to February, fuel prices increased by 6% in March, so year-on-year (YoY) fuel prices changed from a 10% fall in February to modest YoY growth of 1% in March.

As such, fuel prices’ negative contribution to YoY inflation of around 0.3 percentage points dies away in March, which was the main reason behind CPI acceleration (see table).

Food prices stagnated in MoM terms, and their year-on-year dynamics shifted from a slight growth in February to a slight decline.

In contrast to previous months, food did not increase inflation further and, on the contrary, slightly slowed it down in March. This was the reason why inflation accelerated to only 2.3% and not 2.4%, which were market expectations.

Inflation is still being driven upwards this year most significantly by rising prices of alcoholic beverages and tobacco, as this category is contributing 0.9 percentage points to CPI growth. Prices of services accelerated to 2.6% year on year (the same dynamics as in January) after a slowdown to 2.3% in February. 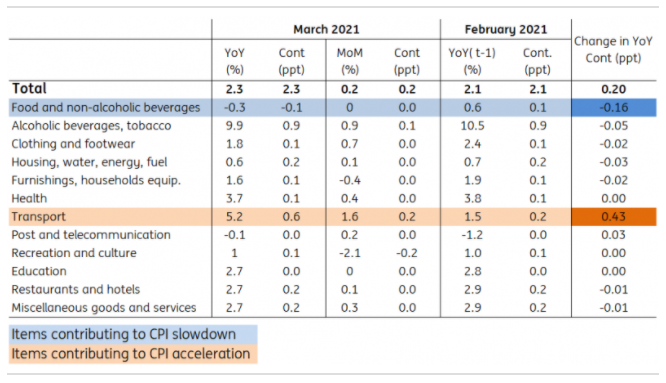 Fuel prices are likely to continue rising in the coming months, albeit at a slower pace than in March, but their year-on-year growth will accelerate due to last year's low base effect when fuel prices were at their lowest due to the fall in oil prices.

Year-on-year dynamics of fuel prices will be affected by this, and inflation is likely to accelerate again close to the 3% threshold, but then this effect will begin to fade, and inflation will slow again. For the whole year, we expect average inflation of 2.5%.

We still expect the central bank to start hiking rates in the second half of the year, most likely at the November meeting.

However, chances of an earlier rate hike, which may start to cause higher inflation in the coming months, would be conditional on a significant improvement in the pandemic situation during the summer. Although the central bank hasn't ruled out a possible rate increase at the August meeting, we think the November meeting has better chances.