January's CPI is often hard to predict and this year was no exception, slowing to 2.2% instead of the CNB’s and market consensus assumption of 1.7%. This surprise was due to volatile food prices, which accelerated by 3.1% - the highest January month-on-month growth rate in the last 21 years (in the available time series). As such, the year-on-year rate for food increased to 0.6% while we expected a fall after the -0.1% rate seen in December. Food prices were expected to detract around -0.3ppt from the YoY CPI rate compared to December. Instead, the contribution increased by 0.1ppt. Thus food prices explain most of surprisingly high January CPI compared to the consensus.

Some other factors more pro-inflationary

Clothing and footwear contributed to YoY CPI slightly (+0.1ppt), as prices usually decline in January but just stagnated this year. Because of the pandemic and related lockdown, traditional seasonal patterns have changed, but the ability to measure prices correctly is also perhaps more limited. Questions related to the proper measuring of CPI in lockdown also surround other items, as recreation and culture contributed to growth in YoY terms.

Prices of services slowed to 2.6% after 2.8% in December, the weakest YoY rate since May 2018. This was also driven by a further slowdown in housing related prices.

Structure of inflation in the Czech economy 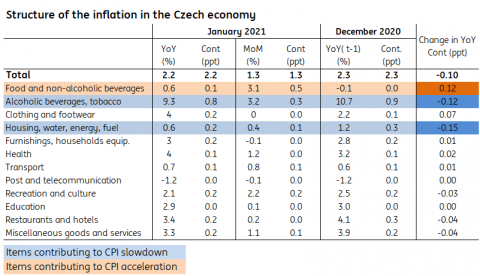 No change to our prediction

While January's CPI can often influence the path of inflation for the whole year, we don't think this will be the case, given that last month's result was driven by volatile food prices, which may surprise in the opposite direction in the months ahead. Therefore we do not change our outlook of a CPI slowdown this year towards 2.2%. At the same time, this is not a game changer for the CNB, in our view. Higher than expected CPI, but still close to target, will not push the central bank to act earlier as it is mainly the ongoing pandemic, rather than inflation, which is keeping rates close to zero. As such, we still see hikes as most likely coming in 4Q21, as we have stated earlier.

Inflation is still not easing – rather the opposite