Deceleration due to package holidays and transport services

September inflation slowed down to 2.3% from 2.5% in August. As such, price growth missed market expectations of 2.5%. The deceleration was mainly due to two items. Firstly, nationwide fare discounts of 75% were introduced in September for students and pensioners. This resulted in a 0.1 percentage point drop in year-on-year CPI growth, according to the more detailed structure of CPI provided by the Czech Statistical Office. Secondly, and more importantly, prices of package holidays declined by more than 20% month-on-month in September. Though this is a typical seasonal pattern in September, the intensity of the decline was stronger than usual. This was very likely caused by the stronger-than-usual increase in prices of package holidays during July-August this year (double-digit YoY growth in both months), which led to a bigger correction after the season ended. This item cut 0.2 percentage points off YoY CPI growth in September compared to the previous month, moving back to the level reached before July. On the other hand, food prices, housing prices and prices for alcoholic beverages contributed to the YoY CPI increase compared with August, see the table.

Inflation will remain above 2.0% in coming months Inflation should stay above 2.0% for the remainder of the year, resulting in an average level of 2.2% for this year. However, inflationary pressures will step up not only due to the perceptible  acceleration in wages but also due to the rise in energy prices, especially electricity and gas for households. At the same time, food prices are expected to accelerate as a result of the weaker harvest following this year's drought. Altogether, this means inflation should come close to the 3% threshold in the first half of next year. Structure of the inflation in the Czech economy 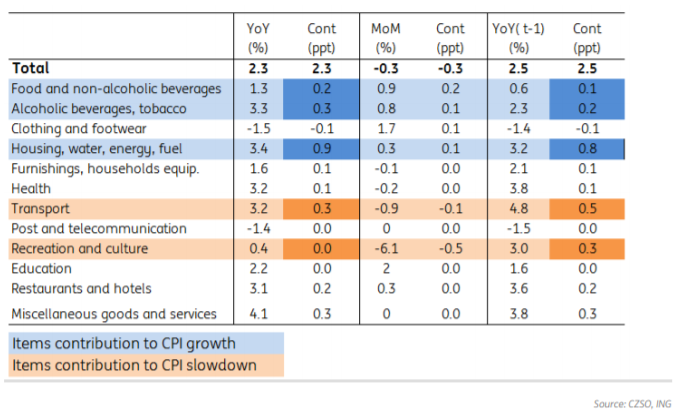 Weaker CPI no game changer for the CNB Although September inflation slightly disappointed, it should be no game changer for the forwardlooking central bank. Indeed, prices excluding volatile food and energy prices are gradually accelerating in the monetary policy horizon. With the Czech National Bank seeking to escape the  low-interest rate environment amid a relatively weak Czech koruna, we expect one more rate hike  this year. As the November monetary policy meeting will bring new updated forecasts, which should confirm the need to tighten monetary policy further, we think the most likely occasion for the next CNB hike will be the start of November.