Slightly weaker inflation in August was caused by a slowdown in food prices, which fell by 0.5% compared to July, with the year-on-year growth rate slowing from 4.4% to 4.1%, the lowest print since October last year. In addition, compared to July, YoY price growth slowed down in housing prices, from 2.9% to 2.6%. There was also a slight slowdown in prices of alcoholic beverages and tobacco although their YoY growth remained at around 10% due to tax growth this year. In contrast, prices rose in the “transport category” due to slightly higher fuel prices as well as car prices, which have been rising for several months, especially for second-hand cars.

Combination of reasons behind higher prices this year

Inflation is generally surprising on the upside this year, with the average value reaching 3.35% in August. Despite a slight slowdown in recent months, food prices, housing prices and prices of tobacco and alcohol products have made the strongest contributions to YoY CPI growth (see chart). Higher food prices were caused by problems with the harvest in some European countries due to the coronavirus outbreak. The earlier mentioned excise taxes also contributed to rising inflation while the weaker koruna during March to May played a role, too, as this made imported goods, including food, more expensive. However, higher prices also reflect the overheated economy and labour market before the start of the Covid crisis.

Still, due to broad-based government programmes to maintain employment, the drop in domestic demand was not so significant, allowing prices to remain steady or even increase, to reduce losses caused by the lockdowns. That said, service prices have started to slow already, to 2.7% YoY in August, up from more than 3% in previous months.

Contributions to YoY CPI this year (%) 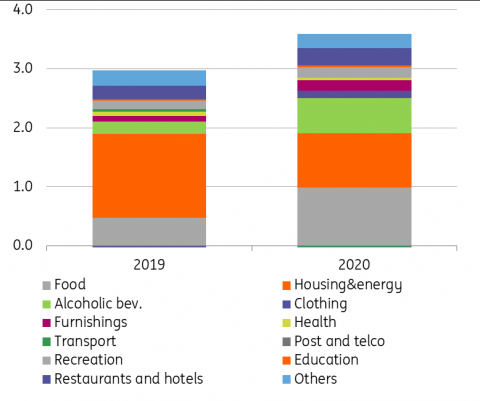 The CNB remains on hold at least till mid-2021

The Czech National Bank expects average inflation to reach 3.4% this year, which would represent the highest inflation since 2008 (6.4%). However, according to the latest CNB forecast, it should slow to 2.4% next year, and according to our estimate it could slow even more due to a high base from this year. Of course, the impact on inflation from the current crisis remains highly uncertain in the quarters ahead. Importantly though, inflation above the CNB's upper tolerance band should be temporary, and thus, the CNB will tolerate it. The CNB could stay on hold at least until mid-2021, according to its latest communication.