According to the Czech statistical office (CZSO), the Czech economy accelerated by 6.2% QoQ in the third quarter of this year, ahead of the market estimate of 5%. However, there was a high degree of uncertainty in the estimates, with a wide range of analyst estimates between 3.5% and  7.5%. From a year-on-year perspective, the decline in GDP remains significant, although it has slowed from an unprecedented -10.9% YoY in 2Q to -5.8% YoY in 3Q20.

We did not get much detail in the flash estimates and will need to wait until December 1st. The CZSO only mentioned that weaker investment and household consumption were behind the YoY GDP fall in 3Q. Still, it was apparent that after a sharp economic downturn in the second quarter we would see solid growth as Covid restrictions ended and the economy was recovering from a low base over the summer.

4Q again in contraction due to new Covid-wave

The favorable 3Q20 growth is somehow less relevant from today's perspective due to the Covid second-wave, which hit the Czech Republic hard (the 2-week sum of Covid cases approached 1,500 cases per 100,000 people at the end of October, one of the highest rates in the EU).

Renewed restrictions mean that the domestic economy will decline again in the last quarter of this year. The intensity of the downturn will depend on the length and scope of economic restrictions. For now, we expect 6% QoQ contraction, and  the YoY fall will thus intensify and will very likely surpass the record decline from the second quarter. 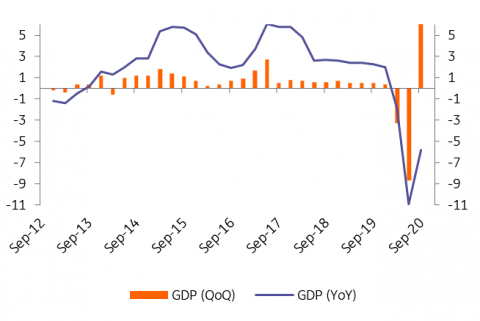 For the whole of 2020, we expect the Czech economy to fall by around 8%, although the better than expected 3Q GDP figure shifts our estimate to a slightly weaker decline. Still, the level of uncertainty about further revisions and developments in the last quarter is so high that there is no need to revise the expected 2020 GDP decline based on today's figures.

In general, however, the advent of the second wave of the pandemic reduces not only growth for this year, but also the outlook for economic growth next year. While the market consensus for GDP growth in 2021 was around 5% a few months ago, now our estimate has moved towards relatively modest growth of 2%. As such, getting to the pre-Covid level of GDP is unlikely before 2023.