The flash estimate published today does not specify the details of GDP; the statistical office only stated that the economic downturn was caused mainly by a significant decline in foreign demand, as well as lower household consumption and investment activity. There was a decline in almost all sectors of the national economy, mainly in industry and in the group of trade, transport, accommodation and food service, which is logical given the restrictions imposed during the Covid-19 outbreak. More information and a detailed GDP breakdown will be published at the beginning of September.

Though slightly better than expected (median consensus: -10.1 QoQ/ -12.3 YoY), the 2Q GDP fall was unprecedented and historically the most severe, which was clear as Covid restrictions fully impacted the economy in 2Q. Analysts' estimates of the QoQ decline ranged from 6% to 14%, according to a Bloomberg survey. This corresponded to a year-on-year decline from 8 to 16%. In the latest forecast, the Czech National Bank assumed a YoY decline of 11.6% , so very close to today’s release.

Revision likely in the future

The range of estimates was unusually wide this time. The situation was also complicated by the fact that the 2Q GDP flash estimate was published for the first time a month after the end of the quarter, compared to 45 days later previously. This means that estimates were made without knowledge of a number of important figures in June, such as industrial production, retail sales and foreign trade. The uncertainty of the estimates was thus higher than before. In the context of the uncertainty of the estimates, it can be concluded that the number published today was generally as expected. At the same time, it is also possible that it will still be revised. 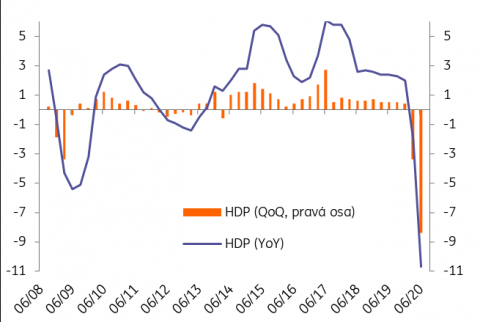 Recovery in the second half will be crucial

For the whole of 2020, we still expect a roughly 7% decline in the Czech economy, but it will very much depend on the pace of recovery of the global economy in the second half of the year, which will, in turn, depend on the epidemiological situation and this is difficult to estimate. The range of market estimates for this year is therefore very wide, ranging from -5 to -10%. For the domestic economy, the worst is probably behind us in terms of GDP, as 2Q should mark the bottom. However, many economic indicators, such as unemployment, will only deteriorate with a delay, so in this sense, the worst is yet to come.