Household confidence fell sharply in October due to new restrictions because of the second Covid-19 wave.

The month-on-month decline was the most significant in the history of the series after the decline seen earlier this year in April. Households are again becoming concerned about both the economic situation and their own financial situation. The intention to save has decreased, which is negative for confidence indicators.

Households are again becoming more concerned about rising unemployment. Overall, household confidence has plummeted to round about the same levels seen in April and May.

Services have been the main casualty so far

Unsurprisingly, business confidence fell too in October, especially in services.

Confidence in services returned to the levels last seen in July, also thanks to high growth in September. Confidence in retail trade has declined only slightly so far, reflecting the fact that data collection hasn't yet captured shop re-closures from last week.

In construction, confidence fell only slightly and is thus stagnating de facto. Conversely, it increased very slightly in industry, mainly due to a better assessment of the current situation, while expectations of future production deteriorated. 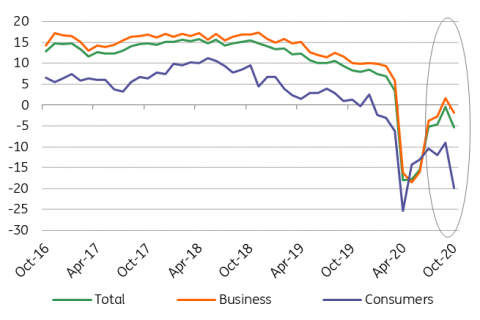 Given the onset of the second wave of the pandemic, the drop in confidence isn't all that surprising.

However, overall confidence among entrepreneurs remains roughly at the level seen during the summer months as the data hasn't yet captured the partial economic lockdown announced last week. For the time being, confidence in industry also remains stable compared to the spring, as industrial companies continue to operate.

Overall confidence in the economy has reached the level last seen in July but it is clear that this is underestimated and the reality is more pessimistic. This is likely to be revealed in the November figures.