Not many details yet

The Czech Statistical Office (CZSO) did not provide many details for the flash GDP figure, noting only that foreign demand supported growth significantly in 4Q20, while domestic demand fell. For more details we need to wait till March. Thus, according to the first preliminary data, the domestic economy, similarly to the German one, very closely averted a W-shaped economic scenario. 4Q GDP growth reached 0.3% QoQ and the year-on-year rate stagnated at -5%.

Comments by CZSO, together with much better than expected figures, suggest that net exports played an important role in 4Q20 GDP. But it also confirms – as monthly data until November suggested - that the negative impact of the second wave of Covid-19 was significantly smaller than in the spring, mainly as industry did not shut down.

However, the impact of restrictions and lockdowns was also milder on retail sales and services. According to monthly data, the decline in services in the most affected industries was to some extent offset by growth in sales in IT or in postal and courier services, and retailers were also able to switch faster to online sales than during the first spring wave. But still, the main reason behind the positive QoQ rate had to be net exports, in our view, which was not only due to better exports, but also lower imports given weaker investment.

For the whole of 2020, the Czech economy fell by 5.6%, which is a relatively solid result given the second autumn Covid wave. In 2009, during the global financial crisis, the Czech economy fell by 4.5%. Without government measures, the Ministry of Finance estimates that the contraction would have been about 0.9 to 1.5 percentage points more severe in 2020. Still, over the last year, double-digit falls seemed like a real possibility and as such, the final figure is a relatively good result. The Czech National Bank in its last November forecast assumed a 7.2% contraction in 2020. 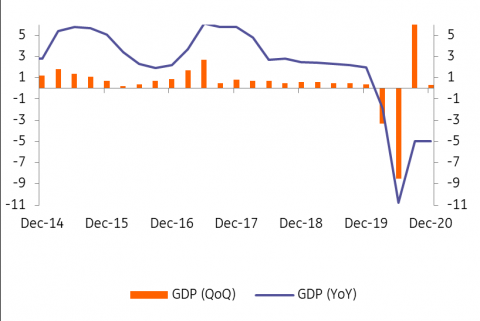 This year, we expect the domestic economy to grow by around 3.5%, especially given our assumption that a rapid economic recovery will start from the end of the second quarter. Although today's better-than-expected figures suggest 2021 GDP growth will be even higher, some risk factors have intensified in recent weeks due to the slow vaccination rollout and new coronavirus mutations. For this reason, we are leaving the growth estimate around 3.5% for the time being.